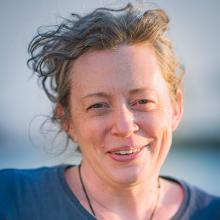 I am an ocean mapper and GIS analyst who works with several organizations to acquire, process, and create products from ocean data, most often water column, seafloor, and substrate information acquired by split-beam, multibeam, and sub-bottom echosounders. I am also a graduate student studying ocean mapping applications related to the earth sciences at the University of New Hampshire Center for Coastal and Ocean Mapping/Joint Hydrographic Center (UNH CCOM), where I am nearing the completion of my Master's. For my thesis I am looking at the spatial distribution of an acoustic scattering later in the Petermann Fjord and Nares Strait of Northwest Greenland, which involves processing and interpreting multibeam and split-beam sonar water column data. The data was collected during a broad mapping and science expedition to the Petermann Glacier in August of 2015.

I went from generally interested in “the environment” to being strongly interested in GIS, geology, and physical geography while doing my undergraduate work at Slippery Rock University of Pennsylvania – I have to thank really good advisors, mentors, and professors for that. My first job out of undergraduate was at the USGS office in Woods Hole, MA, working on habitat mapping. That was the first time I encountered seafloor mapping and the idea of marine geology – we just don’t talk about the ocean much in Western Pennsylvania.

My undergraduate professors influenced me fairly early on to aspire to things I didn’t know existed as study and career paths. But life (and career) is a journey, and I have been influenced and encouraged the whole way -- by my colleagues at USGS, my colleagues working on Fledermaus and Qimera, colleagues in the GeoHab Backscatter Working Group, and now my professors, mentors, and advisors at UNH CCOM and my E/V Nautilus team members.

The fact that I can map a landscape that we cannot see with our eyes (other than short video sections), that we will never fully see exposed. And building on that -- how much we can "see" and "map" in the water column using acoustics. Endlessly cool!

My work at USGS in Woods Hole introduced me to marine geology and ocean mapping. I left USGS to work for IVS3D (now owned by QPS), a company developing software specifically for ocean mapping applications. I was employed as Product Specialist for the Fledermaus software and later got involved in the development and early support of the Qimera software. Suddenly I was immersed in ocean mapping for all possible applications. The desire to really understand how the data we were using was collected led me to graduate school at UNH CCOM.

I love gardening and working in my yard. I enjoy doing old-fashioned foodie things like canning and making tonics and such from all of that great garden produce. I love to get out for live music, especially during the summer festival season. And between all that –trying to get out on my paddleboard or my bike.

Take as much math as you can, even if it scares you. Learn some programming skills, even if that scares you too. Both really help you to understand what is happening with the instruments and the processing tools, which then helps you understand everything else down the road when you try to interpret the data. And when the opportunity comes to get on the boat (or get in the van in western PA), do it!

I began working with members of the Nautilus team when I worked for IVS 3D, a software company that created a program called Fledermaus specifically for visualizing seafloor bathymetry data. I helped to train staff and students at various times to use our software, and was always so jealous that they were going out on these great exploration cruises. When I returned to school in 2016 to do my graduate work, I realized I had the opportunity to finally get out on the ship, and I have continued coming out on Nautilus every year since then.