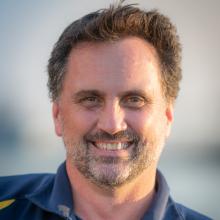 I am a Marine Research Scientist and the Director of the Inner Space Center at the University of Rhode Island Graduate School of Oceanography in Narragansett, RI. I am also a frequent expedition leader onboard the E/V Nautilus and a member of the “Corps of Exploration” with the Ocean Exploration Trust. I also work closely with NOAA’s Ocean Exploration program providing technical and operational support for the telepresence-enabled missions of the NOAA Ship Okeanos Explorer. More recently, I install and utilize portable telepresence systems onboard a variety of research vessels, including several ships in the UNOLS fleet. Scientifically, I specialize in Marine Geology and Geophysics, focused on Deep Sea Mapping and ROV Exploration of a large variety of seafloor environments.

My career was sparked by my interest in science and my interest in the ocean, growing up in Rhode Island, and spending a lot of time on boats. One of my first jobs out of college was working for the USGS in Woods Hole, where I began to travel to remote parts of the planet and participate in oceanographic fieldwork onboard research ships. I fell in love with the work and went on to earn my Ph.D. in Geological Oceanography.

My undergraduate math and geology professors, graduate Oceanography professors, and supervisors at the USGS and Institute for Exploration influenced and encouraged me the most.

I love the thrill of discovery and venturing into the unknown. Learning about physical seafloor environments and exploring the geological and biological processes that occur within these environments fascinate me.

A job I had at the Naval Undersea Warfare Center helped me to be more familiar with computers and other data systems, real-time telecommunications, and technical troubleshooting - all valuable skills for telepresence-enabled ocean exploration.

My advice to someone who would like to have a career like mine is to work hard learning about marine science and marine technology and getting as much experience as possible onboard research ships and in research labs. This will allow early career scientists to understand how to collect and process data and samples properly for research and analysis. To gain an intricate understanding of instrumentation, computers, and other data collection and processing systems will be incredibly valuable and lead to success in research and exploration, in addition to learning from more experienced scientists in the field or lab setting.

I have been part of the Nautilus core team since OET was created and Nautilus was procured. I was previously with the Institute for Exploration, and have been the director of the URI Inner Space Center since it opened.