Over the course of nearly two weeks, this expedition will visit three distinct areas of Monterey Bay National Marine Sanctuary (MBNMS), a region comprising one of the world’s most productive and biologically rich ocean areas protecting over 700 species of fish and deep benthic species. Additionally, our team will dive in Pioneer Canyon, an area characterized by steep-sided gorges on the seafloor of the continental slope that is located in the northern portion of MBNMS and is administered by the Greater Farallones National Marine Sanctuary.

Some areas of interest include the octopus nurseries discovered on previous expeditions located on the southeastern flanks of Davidson Seamount and the nearby actively scavenged whale fall.

The main objectives of this cruise are to map, conduct ROV video transects, and collect biological and geological samples to aid in the characterization of benthic environments, including corals, sponges, seep fauna, rocks, and potentially whale fall fauna. We will also measure in-situ temperature and dissolved oxygen from vents, as well as collect venting water for chemical analyses. The expedition will also collect scientific equipment set out in 2019.

In 2016 and 2017, Nautilus mapped Pioneer Canyon, revealing fractured rock formations, steep rocky pinnacles, and submerged shipwrecks in the deeper portion of the canyon and adjacent areas, including a series of small munitions piles of bullets and ammunition boxes. High-definition cameras on Hercules also revealed many bamboo coral forests and rocky features with complex and diverse corals, sponges, other invertebrates, and associated fish. The main objectives at Pioneer Canyon are to describe the extent of these deep-sea corals, sponges, and associated invertebrate and fish within the deeper portions of Pioneer Canyon, from 800 to just under 1500 meters (2600 to 5000 feet).

Because corals are long-lived and record past environmental conditions in their skeletal structures, they provide another service by helping scientists understand how these communities may have been affected by past climate fluctuations. In January 2020, portions of Pioneer Canyon were opened to bottom trawling, a fishing practice that can sometimes destroy rocky coral reefs and sponge habitats. Surveys from this cruise will be coupled with future planned visual data collection efforts to identify areas most sensitive to bottom trawling and in need of additional protection.

Davidson Seamount: Diving an Oasis in the Deep

South of Pioneer Canyon is Davidson Seamount, an "Oasis in the Deep" in an otherwise flat seafloor. Davidson Seamount is an inactive volcanic undersea mountain located off the coast of central California and is considered one of the largest known seamounts in U.S. waters. From base to crest, the seamount is 2,280 meters tall, yet its summit is still 1,250 meters below the sea surface. This unique seascape hosts large coral forests, vast sponge fields, crabs, deep-sea fishes, shrimp, basket stars, and high numbers of rare and unidentified benthic species.

While exploring Davidson Seamount, we will retrieve equipment placed within fluid seeps in 2019, revisit and further characterize a second octopus nursery, and explore additional deep-water regions of the basaltic rocky reef for corals, as well as sponges and possibly additional octopus nurseries.

In 2018, Nautilus set out to characterize the coral and sponges on deep rocky outcrops near the base of Davidson Seamount. However, within the last hour of our first and only ROV dive in the sanctuary, we discovered extensive aggregations of over 1,000 brooding female octopuses (Muusoctopus robustus) associated with shimmering water venting from cracks along the eastern side of a relatively small volcanic feature, since dubbed the “octopus garden” — where we plan to return to in 2020.

Located at a depth of more than 3,000 meters (9,800 feet), thousands of deep-sea “upside-down” brooding octopus tucked into rocks with their eight arms facing out to cover their bodies and precious eggs. In 2020, Nautilus is once again returning to the site of these never-before-seen aggregations of female periwinkle-hued octopuses.

Since we first discovered the Monterey Bay “Octopus Garden” in 2018, marine scientists have conducted several dives in the region and have observed developments of baby octopuses inside their eggs and at least five hatchlings. This means this rocky outcrop could be an important nursery to deep-sea octopuses! Shimmers spotted during our initial dives were confirmed by return visits to be caused by thermal mixing of warmer venting seawater (up to 10.4° C) with ambient seawater, likely part of a low-temperature hydrothermal system.

We further surveyed this area in October 2019 to place several temperature loggers and dissolved oxygen loggers within fluid seeps to record the fluctuations of those two variables for almost a full year.

A second octopus nursery was found to be associated with venting fluid, where octopus mothers were conspicuously aligned with faults and cracks in the pillow lava. Further characterization of the second octopus nursery and exploration of new targets that may be hiding additional nurseries will be important to not just baseline characterization, but may reveal a brand-new story in MBNMS and deep-sea science: Davidson Seamount may be indirectly supporting the existence of many nurseries that are important to the eastern Pacific population of Muusoctopus robustus.

Located just 1.1 nautical miles from the second octopus nursery lies a whale fall our scientists discovered in the last hour of our final dive in 2019. Located at a depth of just over 3,200 meters, (10,500 feet) the baleen whale skeleton, measuring approximately five meters long still had some remaining internal organs, baleen and blubber. Scavengers and opportunistic predators, including octopus, eelpouts, grenadier, and squat lobsters, were abundant on and around the carcass. Bone-eating worms of the genus Osedax coated most of the exposed bone and were particularly dense along the mandible and ribs. We collected two small bones coated with the burrowing Osedax worms; preliminary results of DNA sequencing from one morphology of Osedax indicate it is a new species.

There are fewer than 100 whale falls documented, and most of them are just bones, suggesting they are old when they were discovered. The whale fall discovered in October 2019 was estimated to be only four months old, as it still had some blubber, internal organs and secondary scavengers consuming these leftovers. Osedax were very prevalent as well. A return visit, nearly 12 months later, will allow researchers to observe changes in the community and the condition of the whale carcass.

To wrap up this cruise, we will dive on an unexplored ridge south of Davidson Seamount that seems promising as potential octopus or coral habitat and sponge habitat, and perhaps even a new region of warm water seeps. 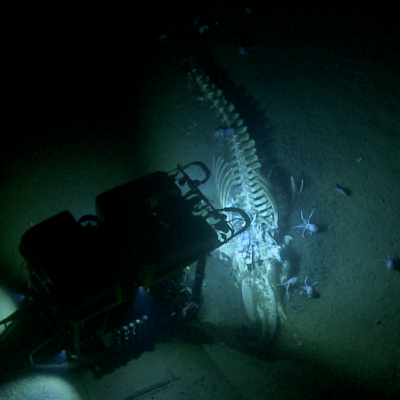 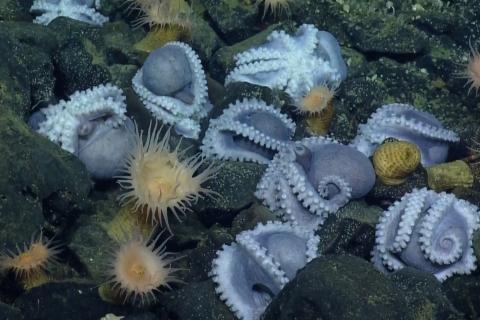 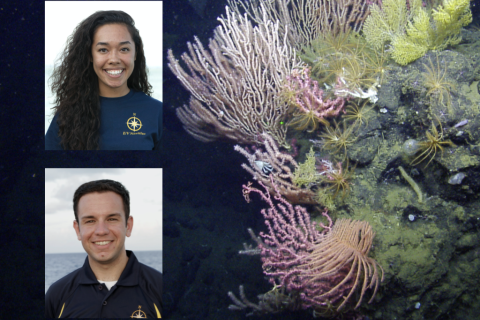 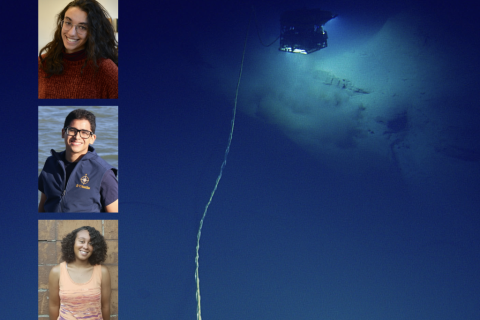