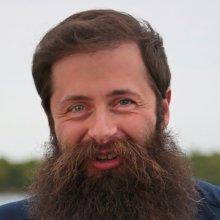 I am a data engineer for OET. I fix/maintain just about everything to do with electronics on the ship except for some parts of the ROV. I run our data systems that collect all the scientific data during a cruise - and also integrate any instruments that scientists bring aboard.

I've always been interested in computers - I enjoy the puzzle of them and I see what a great tool they can be to accomplish amazing projects.

The thing that influenced me the most was the internet with its innocent & optimistic technofuturism during the 90's.

The fascinating part of my job is the sheer novelty of experiences it affords me, rather than doing one specific thing. One day it is solving a new problem with a toolbox of random parts, another it is watching weird squishy creatures move along the seafloor, and the next is exploring a new country with people from all over the world with different backgrounds.

I learned about this job with OET through an alumni group on LinkedIn. Before this, I had done a few sailing trips and dreamed of living on a boat in exotic locales, but never considered a job mixing computers and water.

I don't think any one of my jobs specifically led me here - I sort of luckily stumbled into it. In college, I learned to do science well, and always used that background as a lens in my jobs. My most relevant job involved modeling complex systems in Matlab & Fortran and processing the resultant large datasets - not unlike our data logs onboard. But there is no intelligible A to B to C path that got me here.

I like to think my hobbies really help define who I am. I love getting lost in a good book - fiction and non-fiction alike. And just learning in general - from books, classes, or random conversations with people. I also love a good meander through town or trees as much as through words & ideas. And I can occasionally really nerd out about sous-vide.

"I love being on the E/V Nautilus all season!"