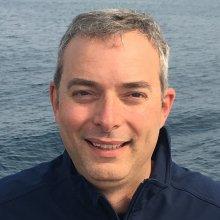 I lead a team of engineers and graduate students in the application of robotics to marine science. We are funded primarily by the National Oceanic and Atmospheric Administration's (NOAA's) Office of Coast Survey, and so our primary application is for sea floor mapping, although we apply these systems to all kinds of marine science. We routinely operate two autonomous surface vehicles (ASVs), (e.g. robotic boats) each with precise positioning systems and state of the art sonar systems for seafloor mapping. Our research focuses on methods to increase the reliability and autonomy of these systems such that they may be more readily used to augment manned systems at sea.

I excelled at math and science as a student. I was terribly curious to know how everything worked. I majored in Physics as an undergraduate and became an officer in the Navy's Submarine Service after graduation. This experience shaped the rest of my career. I served aboard the USS HAWKBILL and we were tasked with two very special, but unclassified, missions funded by the National Science Foundation to map the Arctic seafloor. It was magical, and I managed to find myself at the North Pole twice in 2 years. I served as Science Liaison officer and in that capacity became close friends with the visiting science crew, pestering them about every detail of their careers, gear and sonar systems. A few years after I left the Navy I began working for one of them providing engineering support to oceanographic research vessels, went to graduate school and have been supporting marine science ever since.

Martha Taylor was my high-school calculus teacher and she was like no other. She expected a tremendous amount, asking us to practice hundred of problems and memorize answers to common ones. But she was also compassionate - she knew she was asking a lot and was quick to acknowledge our struggle and help. When I inquired about applications of everything we were learning she created a course, team-taught by 2 math teachers and a physics teacher, for our senior year - Applications of Calculus. She was both inspiring and encouraging.

There was a time when each and every data point collected by a scientist was costly and painful to obtain. They were coveted and scrutinized individually for their meaning and utility. This is still true in some disciplines, but in many, the advent of modern computing and networking has created a firehose of data. We can collect data at colossal rates (some sonars collect as much as 1 GByte a minute!) and it is simply impossible to consider measurements individually. Because of this, I am a big fan of statistics. At its heart, is the science of how well we know what we know. Statistics tells us how to handle multitudes of measurements, that is sometimes uncertain, and how to understand what they mean. At times it is confusing and rife with perplexing terminology, but when you break it all down the concepts are often more formalized versions of your intuition - what you would call common sense.

Of course being a Naval Officer the Submarine Fleet was a huge influence. I became qualified as a Naval Nuclear Engineer, which required learning about everything from reactor physics to metallurgy, radiochemistry, steam plant engineering and a whole lot about reliability and safety. I also served as the ship's Sonar Officer and learned to both drive a ship at sea, but also the physics of underwater acoustics and a bit about sonar signal processing. After the Navy, I worked in as an engineer for an Internet startup in the telecommunications industry. This gave me a good understanding of computers and networking and the protocols used on networks. I also worked for a few years at the Lamont-Doherty Earth Observatory with Dale Chayes and current OET employee Ethan Gold. We provided engineering support to several US research ships including the R/V Ewing and the US Coast Guard Icebreaker HEALY. Engineering solutions on ships far at sea with no internet or phone support were quite an experience.

I have become my family's resident bread baker.

Always raise your hand and ask questions. The very best scientists and engineers I know are the ones who have the courage to ask questions, and they ask a lot of them. Don't be afraid to work hard. When hiring students, I look for the ones who I have to kick out of the lab to turn off the light in the evening because they are interested in something and are staying late. Don't expect learning or science and engineering to be easy. They are not. They require endurance for things that are hard. But they are immensely rewarding; nothing you do in your life that is easy will you look back on with pride. Learn to be gracious and polite.

The Center for Coastal and Ocean Mapping where I work was asked to participate in an effort to field a shallow water sonar system that could be deployed from the Nautilus. Our autonomous systems provide a compact and survey ready platform with just such a sonar system. So we proposed a proof-of-concept mission.