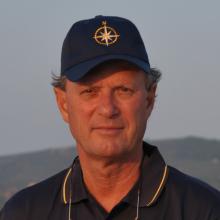 He/ Him
President
Ocean Exploration Trust

Among the most accomplished and well-known of the world's deep-sea explorers, Dr. Robert Ballard is best known for his historic discoveries of hydrothermal vents, the sunken R.M.S. Titanic, the German battleship Bismarck, and numerous other contemporary and ancient shipwrecks around the world. During his long career, he has conducted more than 150 deep-sea expeditions using the latest in exploration technology.

He has received prestigious awards from the Explorers Club and the National Geographic Society—the Explorers Medal and the Hubbard Medal, respectively—as well as the Lindbergh Award. In 2003 President George W. Bush presented him with the National Endowment for the Humanities Medal in the Oval Office of the White House. He is currently a National Geographic Explorer-in-Residence.

I am a marine geologist who first studied the continental margins of North America, but then shifted my interests to the volcanic, tectonic, and hydrothermal processes of the Mid-Ocean Ridges. Later in my career, I developed a secondary interest in marine archeology and maritime history. Of equal interest to me was the development of the deep submergence technology needed to carry out my research; first with the development of deep-diving submersible followed by the development and use of remotely operated vehicles with a focus on “telepresence technologies”. I am also passionate about education and outreach activities encouraging the next generation to build careers in ocean, engineering, and technical fields.

I grew up in San Diego, California a short walk from the Pacific Ocean where I spent most of my childhood free time initially walking along its sandy beaches. This led me to learn how to swim and then SCUBA dive. I became fascinated with the ocean floor after watching Walt Disney’s movie “20,000 Leagues Under the Sea.”

I was lucky to have a lot of people along the way encouraging me to follow my dream to become an oceanographer including my parents, teachers, and eventually oceanographers themselves.

I love putting together teams of individuals from multiple disciplines and inspiring them to take on extremely complex challenges. I find when teams think goals are impossible to do and then actually accomplish those goals, it inspires them to take on even more challenging goals in life.

I first went to sea on an oceanographic cruise when I was seventeen years old. Throughout my education, I spent summers doing something associated with oceanography and ocean engineering. That was followed by a long series of summer jobs working with a team of engineers designing deep-diving submersibles, becoming a dolphin trainer during graduate school, and eventually becoming a Naval Officer assigned to the ALVIN submersible program at the Woods Hole Oceanographic Institution where I spent the next thirty years of my career.

I loved SCUBA diving and fishing while growing up in Southern California, but later in life developed an interest in gardening and becoming “a handyman” around my home when not at sea

I became passionate to build the Nautilus Exploration Program by acquiring a ship and developing it into the E/V Nautilus.

Don’t let anyone talk you out of pursuing your dreams even if you have to overcome challenges that face you in pursuing your passions. One of my challenges was turning my dyslexia into a gift that made my dreams come true.

"As a child I was always curious about things and I was fortunate enough not to have that passion extinguished as I grew up. E/V Nautilus and the Ocean Exploration Trust give me the opportunity to pour fuel on the flames of the public's curiosity to help keep it alive for them."