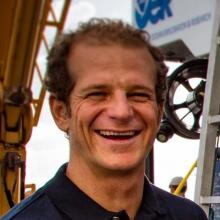 Dr. Daniel Wagner serves as the Chief Scientist for the Ocean Exploration Trust. Daniel has conducted fieldwork on deep-sea ecosystems since 2006, and has since participated in 27 multi-disciplinary research expeditions that explored deep-sea habitats throughout the Indo-Pacific, Atlantic, and Southern Oceans. Daniel grew up in Ecuador, where at a young age he interned at the Galapagos National Park, an experience during which he developed a deep fascination for nature and the ocean. Daniel then moved to Hawaii, where he earned a Bachelor of Science in Biology from Hawaiʻi Pacific University, as well as Master of Science and Ph.D. degrees in Oceanography from the University of Hawaiʻi at Mānoa.

Prior to joining the Ocean Exploration Trust, Daniel worked for the NOAA’s Papahānaumokuākea Marine National Monument in 2011-2016, where he coordinated scientific studies in support of resource management for the Monument. These included participation in over a dozen research expeditions to the Papahānaumokuākea Marine National Monument, information from which was used to underpin the expansion of the Monument and make it the largest marine protected area on Earth in 2016. Daniel served as the scientific advisor to the U.S. White House Council of Environmental Quality on the Monument expansion.

In 2016, Daniel moved to the U.S. East Coast to coordinate NOAA-led efforts aimed at collecting scientific information to support the management of deep-sea ecosystems in the U.S. Atlantic, which included work for the NOAA Office Of Ocean Exploration and Research, and the NOAA National Centers for Coastal Ocean Science. In 2019-2022, Daniel served as the Ocean Science Advisor for Conservation International, where he led multi-partner research initiatives aimed at advancing large-scale marine conservation with a focus on areas beyond national jurisdiction.

Besides a deep love for the ocean and outdoors, Daniel is an avid runner. He resides in Honolulu with his wife and son.