Hovering above the seafloor, the Asperoteuthis mangoldae squid is a recently discovered deep-sea species that was just seen alive for the first time! Researchers think this unusual squid's tail may help it mimic other animals, like a stinging siphonophore. For NOAA scientist Dr. Michael Vecchione who identified the squid, the next question about this little-known cephalopod is why changing its appearance would be important for survival in the almost lightless deep sea. The Nautilus team spotted this sinuous squid at 930m near Jarvis Seamount in the Pacific Remote Islands Marine National Monument.

“On 5 July 2019, diving at 930m depth on Jarvis Seamount, E/V Nautilus and ROV Hercules encountered a very unusual squid swimming just above the bottom. At first, it looked like a long, narrow squid with something stuck on it. The “something” was actually part of the squid, a tail extending beyond the fins and effectively doubling the length of the animal. This was an Asperoteuthis mangoldae, a recently discovered deep-sea species that had never been seen alive until now.

The genus Asperoteuthis is characterized by the strange tail that is retained throughout the life of the squid, as well as unusual tentacles. The tail, which is stiffened by a rod-like structure throughout it length, has sheets of tissue on both sides. These flaps are sometimes called “secondary fins” but, as can be seen clearly on this video, they do not function as fins. Squid fins, like the normal “primary” fins on this squid, flap or undulate to propel the animal and can be used to steer. The tail tissue does neither. Unlike the fins, the tail tissue has very little muscle. We don’t really know its function but it seems to change the appearance of the squid, in this case doubling its size. In related squids, the tail has been interpreted as making the squid look like another kind of animal, such as a siphonophore that has powerful stinging cells. The tail on A. mangoldae is particularly large. This raises a question about how they can swim while pushing or pulling this huge structure around.

The video answers the question nicely and somewhat surprisingly. When first seen by the ROV, the tissue of the tail is fully deployed. After a short while, the squid first swims rapidly forward (arms first), collapsing the tail tissue around the rod-like structure. Then it reverses course and swims rapidly backward (tail first, which is typical for high-speed swimming by a squid). While it swims backward the tissue stays tightly held close to the rod, similar to a sail furled on the boom of a schooner. As the squid swims erratically to escape, even changing color and inking once, the tail stays furled, greatly reducing its drag. Therefore, jetting forward to furl the tail seems to be the first step in the squid’s complex escape maneuvers. The next question is: if this is all about appearance, why is it important for survival in the almost lightless environment of the deep sea? “ 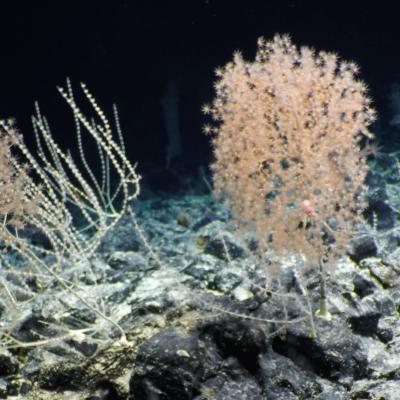