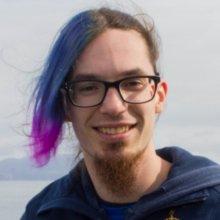 I do video post-production and data engineering for Nautilus. On the data side I make sure the systems recording and storing all our data stay happy, and that the data get's to all the people and archives it should. On the video side, I edit highlights from our dive footage and build graphics and data visualization to show what we do.

The family friend who taught me basic programming as a teenager, and the behind-the-scenes documentaries for the Lord of the Rings films, both probably changed my life forever. More recently, seeing the Rosetta and Philae comet landing, and the New Horizon's Pluto flyby, unfold through Twitter introduced me to some amazing science communicators and convinced me I wanted a career in science communication. That's not entirely where my career ended up going, but communicating science is still a big part of what I do.

There are so many people who have taught me things I think about daily: the executive producer who first hired me at OET and is the boss I always aspire to be, the animator and 3d artist I interned for who taught me about writing code to make art, the other OET data engineers who showed me how to support science operations up close from a ship at sea and over time through data archives, and some awesome science communicators whose work inspires me constantly. I'm not sure where I'd be without any of these people, but it wouldn't be here.

My favorite thing to do is any kind of data visualization. It's always exciting when you're suddenly able to see things that are normally invisible. Whether it's sonar echoes off the sea floor or a stream of numbers from a temperature sensor, data holds so many stories which you'll never know until you can make it visible.

I've worked in a few different roles at the Ocean Exploration Trust, which has let me see different sides of the operation, but just as important has been the work I've done in unrelated areas. Working in TV studios, doing video production and web development for a small publishing company, interning on an animated film, and doing freelance animation and editing work, all taught me different ways of working with moving pictures, technical systems, and different teams of people.

I'll play or write music any chance I can get. I spend probably too much time climbing and recently started trying to learn how to windsurf with varying success.

Ideally, do everything and learn everything, but since that's not possible do what you can. Working with machines is important, but working with humans is always more important. Both are absurdly complicated and change quickly so you just kinda have to accept that you'll always be learning things. Embrace it. While you're at it, having experience in different fields is always valuable. Even things that seem disconnected like writing software and music or visual art will teach you new ways of approaching problems and give you more empathy with the people you work with.

The summer after undergrad, I got a job in the Inner Space Center studio at the University of Rhode Island, doing live production for an outreach program with Nautilus. I came back a few years later as a video editor. While talking to the data engineer there I realized how important the stuff they worked on was to the stuff I worked on, and with encouragement from my supervisor somehow convinced the department heads to let me work in both departments.