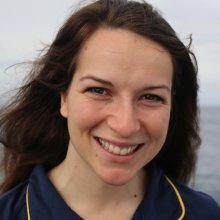 I work with a team of people including educators and researchers who aim to expand the way youth learn about and engage with the ocean. We develop, lead, and study the impact of collaborative, interdisciplinary programs like a tabletop role-playing game based on ocean exploration and art workshops that introduce marine science. Part of my job is bridging classrooms and learners to professionals in ocean careers. Another big part of my job is listening to youth and young learners. I get to ask them "what about the ocean fascinates you and what would help you discover more?"

Because I didn't grow up near a coast, my early fascination with the ocean was mystical and shaped by popular depictions like 20,000 Leagues Under the Sea, Little Mermaid, and SeaQuest. As a freshman in college, I had the opportunity to take a part-time job as an aquarium educator and fell head over heels in love with learning about the mysteries of our underwater world and sharing it with others.

My AP Biology teacher single-handedly convinced me I could think like a scientist. Until that point, I never considered a future in biology. And my hero is Sylvia Earle.

I'm endlessly fascinated by the ways that ocean education can impact youth and educators. In an age of climate anxiety, learning about the ancient complexity and resilience of our ocean is a powerful way to reconnect with both nature and our human place in it. A love of the ocean has changed my life and I'm dedicated to passing that on to the next generation.

After graduating and leaving my college aquarium job, I researched malaria vaccines in a lab then went back to school to become a high school biology teacher. Several years later, I returned to informal education and worked part-time as a natural science illustrator. Becoming a certified SCUBA diver led to being hired as a Marine Science Interpretive Diver back in an aquarium and ultimately my combined interests and background in education, marine science, art, and research led to my current position at an educational research company.

Don't be discouraged if your interests and passions don't seem aligned at first (like video games and hiking or art and sailing). Keep doing what you love and ask questions of anyone and everyone who seems to be doing something similar to what you want to do. Finally, don't be afraid to name what you want and be open to saying "yes" when opportunities come your way!