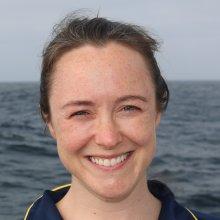 What is your history of engagement with the National Geographic Society?

I received a storytelling grant in 2018 to tell a story about technological innovation and discovery in the ocean's twilight zone, the largest, least-explored habitat on earth. I subsequently received funding to attend the Jackson Wild Conservation Summit and Film Festival in 2019 (funded by NGS and Lyda Hill Philanthropies) and represented New England as the regional representative until 2021.

I am an Exhibit Developer and Writer at the Harvard Museums of Science and Culture, a consortium of museums that includes the Harvard Museum of Natural History, the Peabody Museum of Archaeology and Ethnology, the Semitic Museum, and the Collection of Historical Scientific Instruments at Harvard University in Cambridge, Massachusetts. I received both a B.A. In Biology and M.S. In Science and Medical Journalism from Boston University. I began my career as a scientist studying the behavior of tropical leaf-cutting ants, but my interests evolved beyond biology to a broader interest in science. I am the recipient of multiple awards as a journalist, filmmaker, and science communicator. I’ve traveled the world to tell the stories of science, from deep in the Amazon jungle to the Dry Valleys of Antarctica, and now to the Pacific Ocean to explore the deep ocean. Most of the time during these expeditions, I’m considered part of the team of scientists, so I’m required to put on my lab coat and “scrub in” as a researcher.

Before I started college, I took a year off to work and travel around the world. Most of my experiences landed me outdoors in remote locations doing work that involved some knowledge of the natural sciences. I loved the work, but quickly realized that in order to continue doing it, I needed a degree in science. During my college orientation at Boston University, I switched my major from fine arts to biology and began working in a lab where I studied the social behavior of leaf-cutter ants. I loved the research, but I also wanted something more--I wanted to explore other areas of science while also engaging my more artistic side. During a semester abroad in Ecuador my junior year, I happened to meet a pair of radio journalists from National Public Radio who introduced me to the field of science journalism, a profession for science storytellers. This, I discovered, was exactly the way for me to explore all of my interests, and I never looked back. After finishing my Bachelor’s Degree in Biology, I went on to get my Master’s in Science and Medical Journalism at Boston University, which gave me a strong foundation for telling stories about science. I’ve been doing that in one form or another ever since.

Who encouraged you or influenced you the most?

Aside from my many mentors and teachers over the years, my parents always encouraged me to explore all of my interests. From a very young age, they convinced me that I could do whatever I set my mind to doing. I come from a family of science-oriented people—my mom was a high school biology teacher, and my dad was a physician with an insatiable curiosity about the natural world. Both instilled within me a love for science, but more importantly, they taught me to love learning. Their support, enthusiasm, knowledge, and hard-working mentality set me on a path from which I’ve never strayed.

Always, the most fascinating part of my job is learning something new and unexpected and seeing evidence of it for the first time. Did you know the two percent of Antarctica not covered by ice contains buried glaciers? That massive communities of living things exist in complete darkness thousands of feet below the ocean’s surface? That new species are discovered on nearly every dive to the deep ocean? The world is vast and full of wonder.

I’ve been extremely lucky to have so many opportunities for my career to grow in unexpected ways. I've been a science teacher for elementary school kids in Alaska, a salmon hatchery worker, a tree planter in remote parts of Olympic National Park in Washington, a mangrove restoration worker in Sri Lanka and Thailand, an organic farmer in the Galapagos Islands, a laboratory researcher studying the social behavior and brain morphology of ants, a naturalist sea kayak guide in the Pacific Northwest, a science blogger, a science radio producer, a science journalist who has published numerous articles in national publications, a science film producer who has worked for a multitude of national and international networks, an underwater videographer and photographer, an educator of young science communicators, and an exhibit developer and writer specializing in science-related topics. None of these opportunities would have been possible without my background in science and willingness to try new things. Also, it really helps to be adaptable, reliable, and easy to work with. I work well in a team, and I am good at remaining calm in tense or dangerous situations. I think that's helpful for much of what I do, and encourages people to work with me.

I am an avid outdoorswoman who spends every second of her spare time outside in one capacity or another. Most of my weekends are spent scuba diving along the New England coastline, or hiking the trails with my two dogs. I also love gadgets, particularly camera gadgets, so I spend a lot of time fiddling with my gear, and experimenting with new camera techniques. This particular habit has earned me the nickname "Gadget". I also enjoy music of all kinds. My husband is a professional jazz musician, so I'm constantly spoiled by great live music at home or in the Boston area.

Never stop being a curious, tireless learner! The world is full of more opportunities to learn than you can possibly access in a lifetime, so do your best to position yourself to take advantage of as many of these as possible. To be a science communicator, this curiosity is essential, but so is hard work in school--you need a solid background in science and math to communicate it effectively. You also need the ability to step back from the details in science to see the big picture, and you need to develop communication skills that are effective for communicating a complex idea to non-scientists. My job is to be a liaison between scientists and the public, but to do that effectively, I have to be a competent scientist as well.