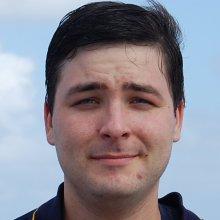 I build, maintain, and research systems for Hercules navigation and mapping. GPS doesn't work underwater, so it can be a challenge just to know where Herc is at any given time. Mapping requires us to know how Herc moves more accurately than most GPS, so it takes a few clever tricks to produce something usable. Which, of course, is the fun part!

I joined a team freshmen year of college to build an AUV for the AUVSI Robosub competition, and have been playing with underwater robots ever since. After college, I went to graduate school at the University of Rhode Island to keep playing with underwater vehicles full-time. Personally, I find robots more interesting underwater because we can't use radio for sensing or control. No GPS, no wifi, and we only get remote control and video by stringing a really long cable.

I've learned a lot from colleagues over the years-- far more than from most course instructors. If you really want to learn how to write a piece of software that will still be working in 10 years, or never have an o-ring leak, or build a really lower-power instrument package, try asking the folks you work with. They know what isn't in the textbook.

When we run a survey with Hercules, we get piles of numbers and images that don't make a whole lot of sense. Processing these into a map that shows something you can't see from Herc's main camera is the best part of the job. For my dissertation, I took two multibeam surveys of a shipwreck Herc excavated and looked for the changes Herc made-- you could see individual pots that had been removed for preservation and analysis. The level of detail was amazing, and hard to see from one survey.

What other jobs led to your current career?

Graduate school has been huge in helping me get into this current job, but I had a few other, much shorter jobs that turned out to be excellent preparation. I briefly worked building acoustic modems between college and graduate school. In college, I also did a 6-month coop (internship) program working for a very large, traditional software company. It may sound dull showing up to an office every day, but the experience was invaluable.

I recently started playing with photography-- above water! Mostly, any excuse to go outside will do.

If you want to go into marine robotics-- or science in general-- learn how to deal with data. There are some things-- how to organize a database, basic coding, probability that sort of thing-- that can make you much a more effective scientist. Above all, apply these things to your problem of interest. Having a goal provides focus and keeps stuff interesting-- and its easy to think you understand something until you try applying it in practice!

I started graduate school with an advisor, Chris Roman, who has deep ties to the Nautilus program. Two degrees later, its still enough fun to stick around.