Take a look back at some of the biggest “WOW” moments of 2022 for Ocean Exploration Trust and the Corps of Exploration as we explored the sea and tested new technology across the Central Pacific Ocean.

First Sighting of a Solumbellula Sea Pen in the Pacific

At 2,994 meters on a never-before-surveyed seamount north of Johnston Atoll, the team made a thrilling discovery — the chance to examine an animal spotted for the very first time in the Pacific Ocean! The sea pen, a colonial cnidarian, had a single large feeding polyp with pinnate (barbed) tentacles stretching over 40 cm from its 2-meter-long stalk. Solumbellula monocephalus is the only described species in the genus and until this sighting was only known to live in the North and South Atlantic and Indian Oceans. Further review of the footage and this sample will help experts determine if this is the first Pacific S.monocephalus or potentially a new species in this ocean basin.

What may look like a "yellow brick road" to the mythical city of Atlantis is really an example of ancient active volcanic geology! Our Corps of Exploration witnessed incredibly unique and fascinating geological formations while diving on the Liliʻuokalani Ridge within Papahānaumokuakea Marine National Monument. At the summit of Nootka Seamount, they spotted a "dried lake bed" formation, now IDed as a fractured flow of hyaloclastite rock (a volcanic rock formed in high-energy eruptions where many rock fragments settle to the seabed). The unique 90-degree fractures are likely related to heating and cooling stress from multiple eruptions at this baked margin.

Did you know ferromanganese coating can form inside and around shark teeth? While examining nodule samples for our expedition to Johnston Atoll, researchers discovered this massive shark tooth! ROV Hercules scooped this from the ocean floor at 3,089 meters deep on an unnamed seamount within the Pacific Remote Islands Marine National Monument. We believe it belonged to the infamous extinct megalodon, but only time (and further lab analysis) will tell us for sure! Dr. Katie Kelley and Dr. Rebecca Robinson at the University of Rhode Island Marine Geological Samples Laboratory spotted this fossil after removing the rocky coating for analysis and are working on further identification.

What happens when four teams of scientists, engineers, and explorers come together to study the ocean? The 2022 OECI Technology Integration Challenge has shown the results are nothing short of spectacular - expanding the potential of a new paradigm for exploration! OET was joined by teams from the University of New Hampshire Center for Coastal and Ocean Mapping and Woods Hole Oceanographic Institution for a multi-vehicle collaboration jamboree! With 210 hours in the water over the course of thirty dives, exploration robots DriX, Mesobot, and NUI were all put to the test, with E/V Nautilus serving as the command center and launchpad. Together, we made huge strides in how we can explore the ocean- from mapping, to sampling, to vehicle-to-vehicle communication.

While exploring the Argonaut Seamount in the eastern branch of the Liliʻuokalani Ridge Seamounts, our Corps of Exploration were treated to stunning views of a deep-water coral garden including dozens of species such as Walteria sponges, Chrysogorgia corals, basket stars, squat lobsters, and so much more. Thousands of meters deep, these coral forests remind us of an otherworldly environment that could be found in a fantasy land. We used to falsely believe that the bottom of the ocean floor was a deserted landscape void of life. Thanks to ocean exploration efforts we now know that life is not only plentiful but also diverse and incredibly beautiful on the ocean floor.

When it comes to underwater reproduction, sea spiders have some of the coolest behavior. We were lucky enough to witness it while exploring in the Pacific Remote Islands Marine National Monument. In this video, you can see two of these marine arthropods, called pycnogonids, likely exhibiting mating behavior. Aligning exoskeleton pores allows fertilization through a chitinous skeleton which protects these creatures on the seabed. After fertilization, the males will carry the eggs in special organs (called ovigers) until they hatch.

Launch of the From Shore to the Abyss Partnership

This year we launched the From Shore To The Abyss (FSTA) program in partnership with the National Geographic Society. OET provided E/V Nautilus and our team’s expedition experience to contribute to discoveries focused on the reef conservation and generating new knowledge that can apply to global ocean conservation, education, and exploration. 2022 included three FSTA expeditions with two National Geographic project teams each focused on understanding different aspects of the Hawaiian archipelago's unique resources. These expeditions focused on exploring nearshore ecosystems and conducting research projects to better understand resident sharks and marine mammals, the impact of plastics on marine environments, and the maritime history of Hawaiʻi. Teams used scuba diving, snorkeling, and small-boat surveys to conduct research projects using cutting-edge technologies and citizen science techniques.

The Pacific Remote Islands Marine National Monument provided no shortage of treats for our Corps of Exploration and this one is especially stylish. This homolid crab is making its way across the substrate with an anemone on its back! Check out this unique trendsetter and marvel in some of the deep sea’s most interesting crustacean behavior. Scientists speculate that the critters may have some type of as-yet-undefined symbiotic relationship.

Our Luʻuaeaahikiikekumu expedition in and around the Liliʻuokalani Ridge Seamounts gifted us with all manner of wonderful and whimsical creatures. One of our team’s favorites was definitely the sea dandelion: aka a communal siphonophore super organism.

Up Close with a Coffin Fish

Normally seen from above, have you ever wondered what the belly of a Chaunacops looks like? This incredible little fish - known commonly as a ‘sea toad’ or ‘coffin fish’, is a species of anglerfish. The genus Chaunacops has three different species, all easily recognizable by their orange or red coloration. Ambush predators who generally stick to the seafloor, this individual swam to the water column up as ROV Hercules approached, allowing our team a spectacular view of its form. This clip shares a great view of the reduced and modified pectoral fins which are adapted to aid the fish perching on seafloor lava flows. Note the tiny white dot between the eyes - its bioluminescent lure, which folds out to lure in her next meal. 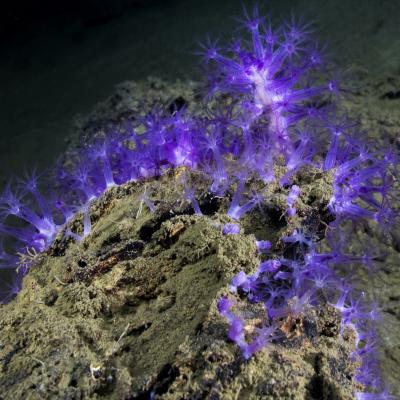 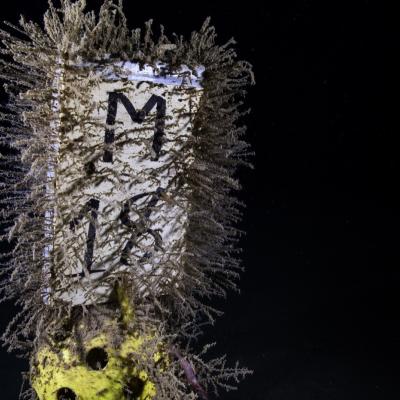 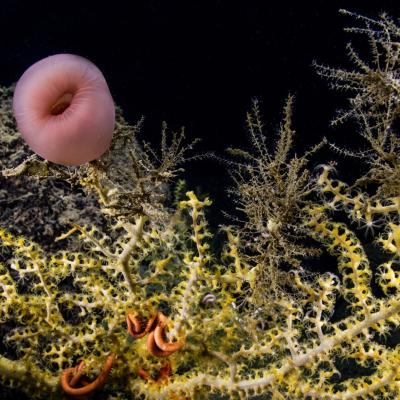 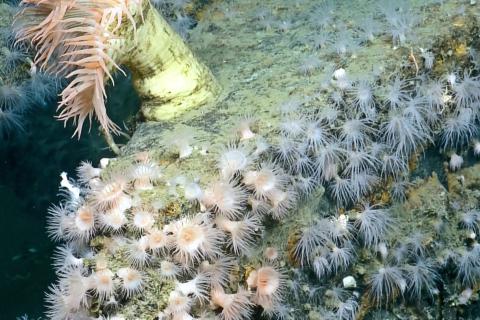 The Biology of Shipwrecks