Between September 20 and 30, 2020, E/V Nautilus will explore methane seeps and deep-sea coral and sponge reefs in Quinault and Grays Canyons, located along the wild, remote, and scenic Olympic Coast of Washington State.

The deep sea habitat of the Olympic Coast National Marine Sanctuary (OCNMS) is a biologically diverse and ecologically rich region that encompasses nearly 8,250-square-kilometers (3,200 square miles) of coastal and ocean habitats. With researchers from OCNMS funded by the NOAA Office of National Marine Sanctuaries and Oregon State University researchers funded by NOAA Office of Ocean Exploration and Research, this collaborative expedition will explore the life that calls these canyon systems home. The team aboard E/V Nautilus will survey deep-sea corals, sponge, and fish habitats, as well as unique organisms associated with more than 2,000 methane seep and hydrate locations identified in this region over the past decade.

Although the sanctuary mostly encompasses continental shelf habitats in water depths less than 200 meters (650 feet), several deeper submarine canyon features extend to depths of 1,500 meters (5,000 feet). The deepest of these is Quinault Canyon and although few ROVs are available to explore such depths, these areas are well within the operational capacity of ROV Hercules.

Quinault Canyon lies partially within sanctuary boundaries and within the protected harvest areas for the Quinault Indian Nation, a sovereign tribal government with reserved rights to marine areas. Our focus will lie on deep-sea canyon communities in and adjacent to Quinault Canyon and ROV work will explore steep, hard-bottom habitats within Quinault Canyon, including within areas mapped by Nautilus in previous expeditions.

Return to the Methane Seeps of the Pacific Northwest

The Cascadia Margin, located offshore Washington, Oregon, and northern California, is a rich area for methane seep exploration. In the past several years, thousands of new methane gas bubble streams from the seafloor have been discovered along the Cascadia Margin by E/V Nautilus, and this expedition will add to that ongoing research. While only a handful of these locations have been visited with an ROV, these dives have led to the discovery of unexpected species and patterns of biodiversity that span the size scales of biology from microbes to animals, many of which were previously unknown from this region of the world. During this expedition, we will use known locations of bubble plumes as a “treasure map” to explore the factors that shape the biology and chemistry of the regions.

Methane seeps form unique habitats driven by complex systems and may influence global climate patterns. Research on deep-sea methane seeps help us to better understand the role of these unique marine environments both in ocean ecosystems providing nutrients for diverse life on the seafloor, and human ecosystems in future “blue economies.”

Methane seeps on the West Coast of the United States are also now considered ‘Essential Fish Habitat’ for management purposes. Many of the seeps Nautilus will study fall within depths that have active fishing, so a better understanding of how variable the species are, their role in ocean ecosystems, and their use by commercially harvested species can provide critical information for management. Further investigations of methane seep communities, including video transects, push cores, and the collection of water samples for eDNA analysis, will also be conducted during the course of this expedition.

Just as bacteria on land are used to make antibiotics, vaccinations, and other pharmaceutical products that we use every day, like antibiotic ointment, there is potential for deep-sea bacteria that we are only beginning to tap into: how they might be used for medicinal purposes.

Some forms of bacteria are able to use methane seeps to make nutrients through chemosynthesis. Bacteria are highly creative, expert chemists that make chemical compounds with molecular structures that human organic chemists cannot even imagine! Like humans use words to communicate, bacteria use chemical compounds to signal to each other. Diverse organisms that live in extreme environments like methane seeps are likely to produce very different and sometimes unusual chemical compounds that could prove beneficial to humans in the way that they interact with proteins, DNA, and other components of cells.

Our work aboard E/V Nautilus in this region will include sampling sediments near methane seeps to help Oregon State University researchers continue to study the biogeochemistry, rare earth elements, and microbial communities at various methane seep habitats.

Nautilus will also return to the site of a large meteorite fall that occurred near the rim of Quinault Canyon, prompting OET to work opportunistically in 2018 with NASA and OCNMS to attempt to recover fragments of the meteorite from the seafloor. This meteorite fragment recovery attempt will be made using a suction hose and a switchable magnet operated by ROV Hercules’ pilots. 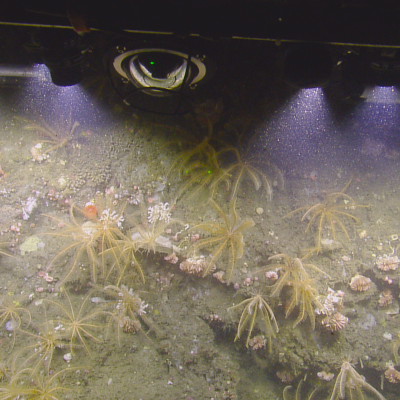 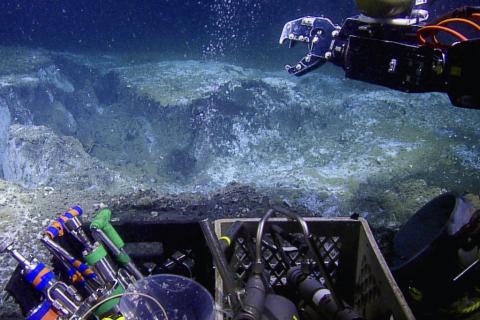 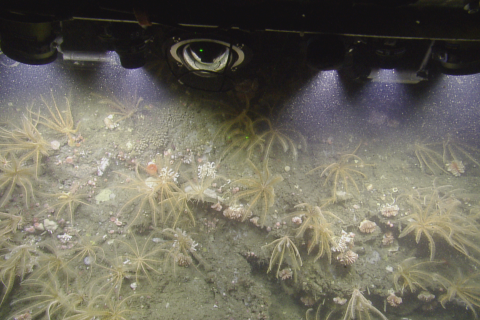