Back to the Seeps: Exploring Cascadia Margin

Launching the first ROV exploration dives of the 2018 Nautilus Expedition, the E/V Nautilus team and research partners will search for methane seep and hydrate sites and characterize their unique ecosystems along the U. S. Cascadia Margin, located offshore Washington, Oregon, and northern California. In the past two years, over 2700 new bubble streams have been discovered at over 1000 individual sites on the Cascadia Margin, and this expedition will add to that ongoing research.

Dr. Tamara Baumberger of NOAA’s Pacific Marine Environmental Laboratory (PMEL) will serve as Lead Scientist aboard E/V Nautilus, with Dr. Robert Embley of NOAA PMEL leading as a Scientist Ashore. Dr. Nicole Raineault of the Ocean Exploration Trust will serve as Expedition Leader for this expedition running from June 12-29, 2018. Research support for this expedition comes from the NOAA Office of Ocean Exploration and Research.

Gas hydrates and gas-filled pockets in sedimentary deposits provide large reservoirs in the Earth’s crust for methane, a potent greenhouse gas. The Cascadia Margin is of particular interest because high volumes of methane gas and hydrate are stored within this zone, and while methane seepage is widespread, the number of known sites has dramatically increased in recent years. Modern multibeam sonar systems, like the EM302 system on E/V Nautilus, have been used to detect methane bubble streams in the water column in addition to collecting seafloor bathymetry and acoustic backscatter. Over the last two years, a coordinated water column mapping and data mining effort has resulted in the discovery of over 2700 new bubble streams at over 1000 individual sites on the Cascadia Margin in a depth range from 40 to 2040 m. However, these new surveys have only covered about 25% of the area of the Cascadia Margin and are very sparse in shallower water, while methane seeps are common over a large depth range.

During this expedition, ROV dives will be conducted during daytime and seafloor mapping during the remaining hours. The dives, focused on several geographical regions along the Cascadia Margin, will be conducted at methane seep sites on the shelf, the upper, mid- and lower slope and at the base of the slope. Most of these seep sites were discovered during mid-water surveys during four E/V Nautilus mapping expeditions in 2016 and 2017, and have never been visited by an ROV (Embley et al., 2017). Just a small number of the ROV sites will be revisited to shed light on chemical and biological anomalies observed during 2016 exploration aboard Nautilus (Seabrook et al., 2017). The mapping focuses on exploring for more methane seeps in currently unsurveyed areas.

There is great interest in systematic mapping and characterizing of methane seep sites along the remaining unsurveyed areas of the Cascadia Margin to document the distribution of seep sites, better understand impacts on bottom and mid-water ecosystems, and to determine the current flux of methane into the ocean. Establishing such a baseline is timely because geological events, such as earthquakes or submarine landslides, could result in important environmental impacts due to sudden methane release.

Likewise, ocean warming could change local physical conditions, destabilize gas hydrates, alter the plumbing system that traps gas-filled pockets and thus modulate the release of stored methane to the ocean leading to environmental impacts. The large number of seeps discovered from just this partial survey of Cascadia shows the need to finish this task so the result can be used to better quantify the current methane flux on the US west coast continental margin. The results to date are also of great interest to other areas of research, like the role of the chemosynthetic habitat and the associated carbonate layers in the ecosystems of the continental margin. 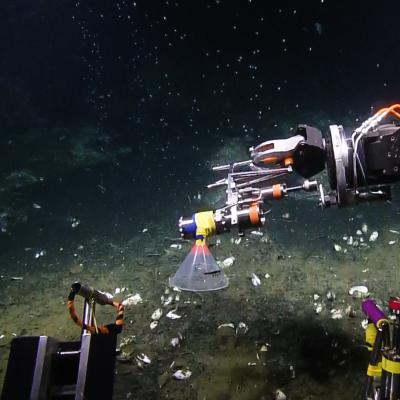 The main objectives of this expedition are to explore for methane seeps and hydrate sites and to characterize their associated ecosystems along the U. S. Cascadia Margin. Gas hydrates and gas-filled pockets present in sedimentary deposits provide large reservoirs for methane in the Earth’s crust, and the importance of methane as a potent greenhouse gas has been recognized in recent years. 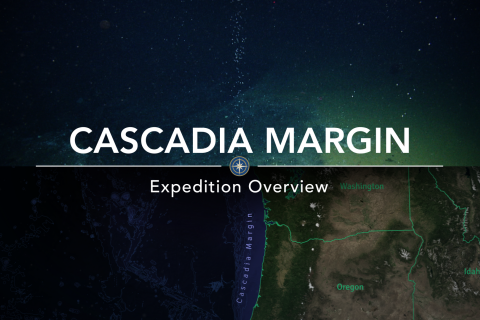 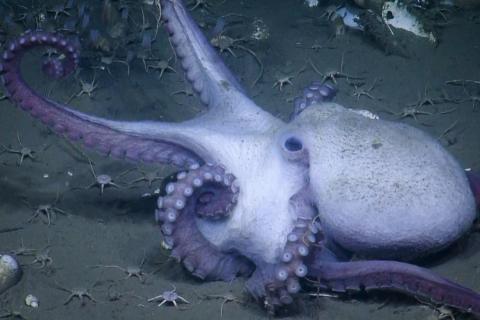 Cephalopod Week in the Cascadia Margin