During the pivotal battles of World War II (1941-1945) and military action in the following years, hundreds of U.S. Navy vessels and aircraft were lost at sea. The waters off Pearl Harbor and of the greater Pacific Ocean are a graveyard of World War II shipwrecks, and an underwater museum for the Battle of Pacific. These historic sites not only serve as reminders of our past, but also as points-of-departure to connect human stories with our present and future.

Part of a multi-year exploration program, this historic campaign utilizes various tools of exploration, including E/V Nautilus and remotely-operated vehicles (ROVs) Hercules and Argus, to explore, discover, and document iconic ships and aircraft lost in the Pacific during World War II. In locating and documenting these wrecks, this campaign revisits the stories of sacrifice made by ships and servicepeople, and helps to write final chapters to put them to rest.

Through live telepresence, open-source data collection and expedition target decisions are shared by a multidisciplinary research and academic community. At the same time, a global public audience, including veterans and active service members, is able to join in real-time exploration. Bringing together real-time exploration, archival knowledge, and collaborative expertise in maritime heritage exploration, this campaign engages in Earth’s final frontier through the lens of pivotal moments in world history to encourage curiosity and STEM (science, technology, engineering, and math) learning.

Expedition and research partners for this campaign include:

In March 2015, scientists from NOAA’s Office of National Marine Sanctuaries, Ocean Exploration and Research, and the Naval History and Heritage Command positively identified a target believed to be USS Independence 30 miles off San Francisco during an autonomous underwater vehicle survey. Continuing the Nautilus Exploration Program’s mission to explore the oceans, the Corps of Exploration on E/V Nautilus conducted the first-ever visual survey of the sunken aircraft carrier USS Independence in August 2016.

Constructed during the middle of World War II, aircraft carrier USS Independence reached Pearl Harbor in July of 1943 and joined the Pacific Fleet and was involved in numerous major campaigns in the final two years of the war. USS Independence received eight battle stars due to the actions of the Sailors, Officers, Pilots and Marines who served onboard. Learn more about the history of Independence’s service in the war and explore eyewitness accounts of her service collected by the Naval Historical Foundation.

After the war, Independence was one of two aircraft carriers to be positioned at Bikini Atoll for the Operation Crossroads nuclear bomb tests. She was placed within one-half mile of ground zero for two atomic test explosions, damaging Independence but not sinking her. Decommissioned in 1946, the “ex-USS Independence” was towed to San Francisco and eventually scuttled offshore of San Francisco in 1951.

Launched in August 2016, the Nautilus expedition to survey this wreck marked the first time humans had laid eyes on Independence in over 65 years. Scuttled in waters now within the Monterey Bay National Marine Sanctuary, the region is managed by the Greater Farallones National Marine Sanctuary, who led the 2016 Nautilus expedition to rediscover this historic shipwreck. While diving on Independence, our team conducted a systematic site investigation, including video surveys to identify vessel construction details and damage from the Bikini tests, and documentation of the process of the wreck becoming a biological habitat for massive glass sponges and corals. With ROV Hercules, our team also conducted the first survey of Independence to collect photomosaic and microbathymetry data, high resolution images which helped construct a visual overview of the wreck and compare the current state to the condition in the post-atomic test damage reports.

Just offshore the northwest corner of the Olympic Peninsula, a maritime heritage site rests 800 feet below the surface of Olympic Coast National Marine Sanctuary. The USS Bugara is a U.S. Navy submarine that received three battle stars for its service in World War II, later serving in the Korean War, Vietnam War before being decommissioned in 1970. While under tow to serve as a target vessel in 1971, the submarine began to take on water and foundered off Cape Flattery, Washington.

Ocean Exploration Trust has teamed up with NOAA’s Office of National Marine Sanctuaries to conduct the first archaeological survey of the USS Bugara on August 25, 2017 and will include scientists, archaeologists, historians, educators, and subject matter experts from across the nation via satellite during a live streaming dive from ROV Hercules and ROV Argus launched from E/V Nautilus. 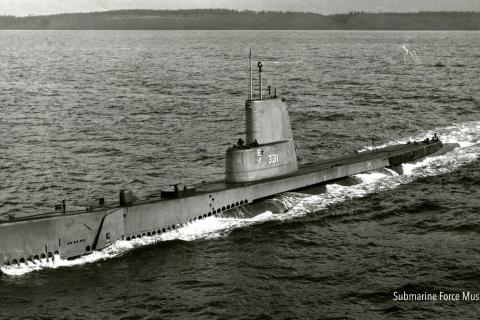