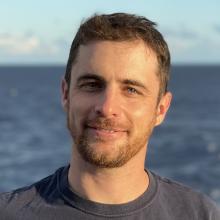 I am a camera operator who specializes in documentaries about science and wildlife.

Growing up I watched a lot of wildlife documentaries. The behind-the-scenes footage was always my favorite, and I knew that doing that type of filming, in wild places, was my dream job.

I've had a a few teachers and a few "bosses" that encouraged me and challenged me to achieve more. Their confidence in me gave me confidence in myself.

On my first ever Nautilus dive, as a Video Intern, we found the largest octopus nursery ever recorded. It's moments like these, seeing things that few people (or no people) have ever seen, that are most rewarding. Sometimes its from the Nautilus control van. Other times its through a telephoto or macro lens on my camera out in the wilderness.

After graduating from film school in 2011, I worked in all types of freelance roles across the film and television industries. I always searched for jobs related to science and nature. In 2012 I made videos for a children's science and nature camp in Southern California. In 2016 I began graduate studies in Wildlife Filmmaking in Bristol, England. That program opened a lot of doors into more science/wildlife related jobs with EV Nautilus, National Geographic, BBC, and more.

Even if you don't have you're dream job yet, focus on learning and mastering new skills. And get used to working hard. Some day you'll get an opportunity, and that work ethic and mental flexibility will pay off in a big way.