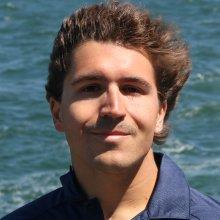 My thesis work focuses on testing a water quality monitoring payload for an autonomous kayak. The payload uses a peristaltic pump to sample water flushing it past several optical sensors. Readings from the sensors can tell us about important water properties like oxygen concentration or chlorophyll density. My job was confirming that the system measurements were representative of where it sampled in the water column. I identified how the system operates, why certain sensors responded differently than others and used that information to carry out autonomous profiling operations.

Being near the water was always a large part of my childhood, and my interest in engineering came about when I was in high school. I was fortunate to have teachers along the way who encouraged me towards engineering, and I decided to focus on Ocean Engineering after transferring from community college. It was a natural combination of the environment I love and the work I want to do.

My teachers, professors, and adviser influenced me to always continue working towards the next goal even when it seemed insurmountable at the time.

Discovering new features in the water column fascinates me the most. We know so little about the water covering most of this Earth that even the smallest discoveries can help re-write what we knew entirely.

My focus has been on school so far, but I held IT technician positions throughout college that helped me learn how to troubleshoot. A semester-long internship doing software development taught me a lot about large-scale software projects. These led me to the work I've done in the Roman Lab maintaining and deploying the autonomous kayak.

I'm slowly getting into photography, and generally, love to be outdoors. When stuck inside though it's always fun to play a board game or two.

Never stop asking questions, and be positive when things aren't quite going your way. It's been a difficult habit to instill in myself, but the work only gets easier when you don't beat yourself up over something breaking.

I worked alongside students managing the high-resolution imaging system deployed on Hercules and had an opportunity 3 years ago to be a mapping intern.