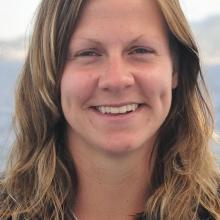 Liz Morrissey is a data logger on the E/V Nautilus.

Liz started researching the use of bioacoustics in predator-prey interactions while an undergraduate at the University of New Hampshire. After graduation, she took a short hiatus from the northeast and was a research diver for the Florida Fish and Wildlife Commission in the Florida keys. (She also had to opportunity to get in some wreck diving!) Liz returned to New England as a Fisheries Observer, and worked intensively with the local fishing community. When not on a commercial fishing boat, Liz was a naturalist at the Seacoast Science Center in Rye, New Hampshire where she educated school groups and summer programs on the history and ecology of the rocky intertidal shore. Liz is very partial to invertebrates, and returned to University of New Hampshire as a research assistant for several American Lobster projects.

Liz graduated from the University of New Hampshire in 2009 with a Bachelor of Science in Zoology. She was also a student at the School for Field Studies on the Turks and Caicos Islands.