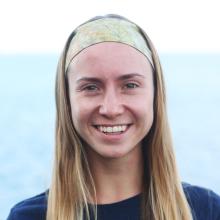 During my undergraduate career, I chose to specialize in marine invertebrate biology. I’ve always been fascinated by the unique anatomy and physiology of invertebrates, as well as the important ecological roles they play throughout the ocean. My undergraduate thesis was dedicated to investigating the neuromuscular behaviors of sea stars as well as how such behaviors are impacted by exposure to predicted future seawater temperatures. As a grad student, I plan to study methane seep communities and the relationships between invertebrates, microbes, and geochemistry in these habitats. I'm also interested in the way that deep-sea invertebrate communities are impacted by anthropogenic stressors such as deep-sea fishing, mining, and energy extraction. Overall, my aim is to contribute to our understanding of seep communities and the important ecological roles they play so that we might better be able to manage them, especially in the context of blue economy activities. I think a big part of encouraging better ocean management also involves sharing ocean research and exploration with others which is one of the reasons why I love working aboard the Nautilus.

I grew up in New York City, but exploring and understanding the natural world has always been a passion of mine. As a kid, my dad and I used to play "the question game." I'd ask him anything and everything that came to my mind: How do birds fly? Why do flowers bloom? How does the moon control the tides? I was ultimately drawn to marine science for two reasons. First, so much of the ocean that covers roughly 70% of our planet lays unexplored. There is so much to be discovered and understood! Secondly, our lack of understanding contributes to poor management of the way we interact with these oceans. I love marine science because it's both fascinating and allows me to help improve our relationship with the natural world.

I would say I've been most inspired by the professors and co-workers who have mentored me throughout high-school, college, and my post-graduate life thus far. Not only have they provided me with countless opportunities to grow as a scientist and researcher, they have been truly dedicated to me as a person. I couldn't be more grateful for the advice and guidance I have received from each of these incredibly passionate, wise, and driven people. Science can be an intimidating field sometimes. It's hard when experiments don't go as planned, when you don't know what direction to pursue next in research, when you feel like you lack understanding or skill in a certain area. In these situations, it's always been my mentors and peers who have helped and encouraged me. Science isn't a one (wo)man job and "good" science is most often the result of the efforts and guidance of many.

I find it most fascinating to study invertebrates because of the fact that they are often so completely different from humans and other familiar terrestrial animals, in every way ranging from anatomy to behavior. Marine science in general is a field that constantly excites me, especially because of how much we have yet to discover about the many organisms living in our oceans and the unique habitats they live in. Hydrothermal vents, for example, offer a promising site for the origins of life on Earth, and yet we only relatively recently discovered and began to study them and the organisms they sustain. The ocean remains a thrilling frontier for future study and one that I am very happy to be involved in.

As an undergraduate, I explored multiple different specializations within marine science in an effort to find the one I wanted to explore more deeply through a senior thesis. I aided in various research projects including a sunscreen toxicology study on reef fish, a geochemical research project on Deepwater Horizon oil spill sediments, and a risqué and very interesting project on the morphological plasticity of barnacle penises. Although these topics were not always exactly what I saw myself studying long-term, each opportunity offered me valuable experience in different ways. Ultimately, I chose to conduct my senior thesis research on the relationship between sea star behavior and increasing seawater temperature, but each of my previous experiences contributed to my success in that project. These experiences then ultimately lead me to work aboard the Nautilus and solidify my love for deep-sea research. I think it's important to continuously seek out and pursue new opportunities to remain inspired and to gather up the auxiliary skills that make for a unique and versatile marine scientist.

I have a Bachelor’s of Science in Marine Science with a specialty in biology from Eckerd College.

I have a never-ending list of hobbies that include hiking, rock climbing, scuba diving, traveling, yoga, painting, reading, and singing loudly to music in the car. In my dreams that list includes base jumping, but I’m not that cool yet.

Although I myself have not yet found my way to a defined career, I have one piece of general advice for any young marine scientist. It may seem cliché, but don’t give up! We all experience rejection and what feels like failure; marine science is a very competitive and very difficult field. You are not always going to score your dream internship or job. Your research will not always go as planned. One of my professors once told me after a particularly upsetting rejection letter that "we ALL have setbacks: it's how we recover from them that will determine how we flourish." If there is one thing I've realized about a career in marine science thus far, it is that my professor was right. If you want to be successful in marine science you need to exercise persistence; don't beat yourself up over setbacks and you will always recover.

I first came aboard the Nautilus as an Ocean Science Intern through the OET Science and Technology Internship Program. This will now be my third season working aboard the Nautilus and I couldn't be more grateful for the opportunities, friendships, and connections I now have through OET. I strongly encourage any budding deep-sea scientists, ROV/video engineers, mappers to apply for the program!