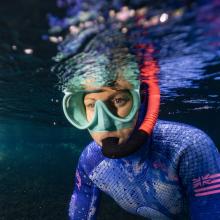 What is your history of engagement with the National Geographic Society?

I have received 2 grants from the National Geographic Society.

I specialize in underwater photography and telling stories about science and conservation with a camera. Most of my work involves scuba diving or freediving to document stories underwater, both in my back yard and all over the world.

I am originally a marine ecologist by training--I even completed a PhD, originally thinking I would go into research. But in grad school, I became more and more interested in science communication and bringing scientific research to a wider audience outside the pages of peer-reviewed publications. During this time, I also began photographing underwater in Florida's freshwater and realized the power of imagery to connect people with these incredible ecosystems, which are also sources of their drinking water.

What element of your work/study is the most fascinating?

The most exciting part of my work is when I get to be in the water and out in the field. I do spend a lot of time reading scientific papers, writing grant proposals, and editing photos, so the days when I'm immersed in the ocean (or a freshwater cave!) are the best days. I feel the most creative when I'm submerged and I have especially loved diving in and documenting the kelp forests in California, where I moved earlier this month after a decade in Florida.

What other jobs or skills led you to your current position?

I grew up in, on, and around the water, first as a competitive sailor (which I continued through college!), then as a marine ecologist and a diver. I'm generally more comfortable in and on the water than I am on land. Throughout my career as a scientist, I studied the marine intertidal, coastal salt marshes on the US east coast, Gulf sturgeon in Florida, the impacts of the BP oil spill on mesophotic reefs in the Gulf, and freshwater turtles in Florida's springs. I've done extensive training as both a scuba diver and freediver and spend every spare minute underwater.

I love mountain biking, longboarding, yoga, and petting every fluffy dog I can find!

If you want to become an underwater photojournalist focused on science, there are an infinite number of paths you could take. I chose the science route then switched to photography and storytelling later, but I also have friends who were originally photographers who learned about science later. Some people have PhDs, some don't. Some have formal photography training, others don't. My number one piece of advice is to get incredibly comfortable in the water (without your camera first!), then spend a ton of time practicing near where you live... you don't have to travel far or have a fancy camera to take photos. Get involved in the local science and conservation community in your hometown (NGOs, local universities, etc.) and start applying for grants and pitching stories. There are so many cool local publications that would love to work with you... that way you have work samples and can start to build your portfolio for when those bigger projects and assignments come your way.