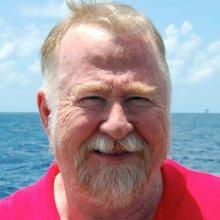 With over 39 years’ experience in underwater archaeology, Jack Irion's work has resulted in the discovery and documentation of numerous historic sites and shipwrecks. He is particularly interested in the maritime history of the Gulf of Mexico and in deep-submergence archaeology using robotic technology. Since joining the Bureau of Ocean Energy Management (BOEM), Jack has directed the documentation of several historic shipwrecks on the Outer Continental Shelf. These have included the Civil War gunboat U.S.S. Hatteras and the 19th century coastal steamers New York and Josephine. Over the past 10 years Jack has overseen projects that investigated the deepest shipwrecks ever found in the Gulf, including the German submarine U-166 in 5,000 feet of water, and some of its most historic, such as the “Mardi Gras Shipwreck.” Most recently he directed the team that discovered an early 19th century armed sailing ship in the Gulf at a depth of over 4,000 feet and an 18th century wreck over 7,500 feet deep.