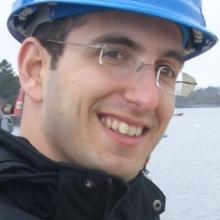 Hadar Sade works as one of the navigators onboard the E/V Nautilus.