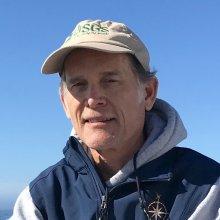 I specialize in seafloor mapping of surficial geology and benthic habitat. The maps are useful for the management of benthic fisheries, offshore minerals, and offshore energy. The maps are derived from multibeam echosounder (MBES) data and seafloor video data. In my work, ROV transect plans are developed by classifying the MBES data into Coastal and Marine Ecological Classification Standard depth, slope, and induration classes. The goal, when making maps, is to have sufficient video for ground-truth in areas representing each combination of classes to subsequently make statistically robust models of the geology and habitat. The goal for exploration is to identify transects across likely habitat for species or features of interest. In recent years deepwater corals and rockfish have been the species of interest to managers.

Jacques Cousteau is why I started diving in high school. In my senior year in high school, I started work at the Anchor Shack dive shop owned by Bob Hollis who had just started producing Oceanic Products underwater camera equipment and there I developed an interest in underwater photography. When I was an Oceanography major at Humboldt State University my primary specialization was Geological Oceanography but I retained an interest in Biological Oceanography. After undergraduate school I was hired by the U.S. Geological Survey (USGS) Coastal and Marine Geology Program as a geological assistant to a Marine Geophysicist. I continued working at the USGS on and off while attending graduate school focusing on geophysics and the flow of fluids from marine sediment under compression in subduction zones. Where these fluids escape into the ocean there are often unique chemosynthetic communities of fauna. So now I am an underwater photographer who uses geophysics to make models of geology and habitat.

My social studies teacher in high school, Eleanor Sekerak, gave a lecture on plate tectonics that blew my mind, otherwise I might have been a marine biologist. Kevin Wong gave me the job at the Anchor Shack that inspired a lot of confidence in me. My Geo-ocean professor at HSU, Robert Thompson, was a great role model.

I was trained as a Deepworker submersible pilot and participated in the Sustainable Seas Expeditions for NOAA where I experimented on the use of a one-man, scientist-operated submersible as a habitat mapping ground-truth instrument.

My interest in the influence of geological processes on benthic ecosystems was increased by early work on fluids in subduction zones. I was a student member of the original Alvin submersible work in an area where cold-water fluid seep chemosynthetic faunal communities were first observed off Oregon on a feature now called Hydrate Ridge.

Masters of Science in Geological Oceanography - University of Washington,

I battle weeds and gophers in my yard.

I work with NOAA sanctuaries on mapping habitat and designing video transect plans for the discovery of species and features of interest.

My bachelors level statistics course was an ok introduction but you should be much better at statistics if you want to classify MBES data into models. Geographical Information Systems (GIS) software is used for mapping and many useful GIS tools assume a solid understanding of statistics. If you don't like physics and calculus choose geology over geophysics. For geophysics, you will need to understand sound wave propagation so that you can distinguish the seafloor from a school of fish in the MBES data. For geology, you will need to get your hands dirty.