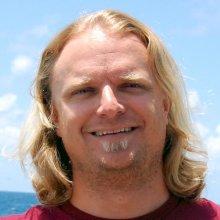 Frederick “Fritz” Hanselmann is a Research Professor and the Chief Underwater Archaeologist/Dive Training Officer with the Meadows Center for Water and the Environment at Texas State University.  He is the director of the Meadows Center's Underwater Archaeology and Exploration Initiative.   Fritz received his MA in Anthropology and is a PhD Candidate in Anthropology at Indiana University. He also has a Master in Public affairs with a focus on submerged cultural resource management. Having worked on underwater sites from a wide variety of time periods, his research ranges from submerged prehistoric deposits in springs and caves to historic shipwrecks in Latin America and the Caribbean, including the wreck of the Quedagh Merchant, abandoned by Captain Kidd in 1699 off the coast of Hispaniola.  Fritz led the first-ever archaeological survey of the mouth of the Chagres River in Panama in 2008 as the initial phase of the ongoing Río Chagres Maritime Landscape Study and returned in 2010 and recovered cannons  from the wrecks of Henry Morgan’s ships lost in 1671, initiating the Lost Ships of Henry Morgan Project. He is the co-director of other underwater archaeological projects in Colombia, Mexico, and Texas.  Fritz also focuses on capacity building and training for archaeologists and heritage managers in less developed countries, as well as the development of marine protected areas and underwater preserves.  He is a GUE Cave and Technical Diver, a Nautical Archaeology Society Tutor, a certified scuba instructor, an ambassador for Aquadive Watches, a member of the Body Glove Dive Team, and a fellow of the Explorer’s Club.