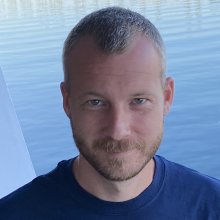 As a mechanical engineer at WHOI, I've played a supporting role in many different scientific and engineering visions. Generally, I design, prepare and deploy equipment needed for scientists to achieve their oceanographic goals. I spend about half of my time in front of my computer and the other half doing lab/field work; anything from careful CAD design to last-minute hose clamps and electrical tape.

When I started working at WHOI, I wasn't sure what I wanted to do, but I quickly fell in love with my job as an assistant engineer. My boss was in high demand for his expertise, and I saw how many interesting projects he was involved in, and how many intelligent, creative people he had formed relationships with. By definition, our job as engineers required us to develop new techniques to support others' new ideas. This was, and still is, very exciting to me.

My first supervisor at WHOI played a key role in me becoming an engineer. I started working for him at an entry-level position, and I wasn't looking for much more than a paycheck at the time. He began teaching me how to do all of the engineering work that he was doing, introducing me to others as his "assistant". It meant a lot to me at the time, and was the catalyst for my pursuit of a mechanical engineering degree.

Exploring the unknown is always exciting, but I particularly enjoy the challenge of ocean exploration. The ocean is a harsh environment that will crush instruments, corrode fasteners and short electronics if given the chance. Trying to take measurements of the very environment that wants to destroy your equipment is a fun (albeit frustrating) game.

Prior to my current career, or even an acknowledged interest in engineering, I worked in a bicycle shop, and then as a solderer in a data logger company. In retrospect, these gave me some good hands-on skills to supplement the academics that would come later. I currently have a side job as a diver, which keeps me directly in touch with the ocean and how different things behave in it.

I enjoy biking, running, and my side jobs as a musician and diver. My happiness is closely related to that of my dog.

My work at WHOI has led me to become part of the Mesobot team this past year. I was asked to attend this cruise, and happily accepted.

The biggest on-paper requirement for my current position is a degree in engineering. That's important as it provides the basic foundation for a more specific engineering career. Aside from that, very little in my professional life has gone according to plan. When I began working at WHOI, I had basically flipped a coin to decide whether I would work in a biology or engineering lab. I began going on cruises (and subsequently met my wife) because I was filling in for guy that was out sick. I became involved with the Mesobot AUV after bumping into someone in the hallway and showing interest in what they were doing. Having a plan is important, but I've found more success when I also stay open to the unexpected opportunities that pop up. Working well with others is also very important, as most of what I do involves being part of a team. I try my best to stay humble and teachable in all situations. When I start thinking I know it all, I'm in trouble.