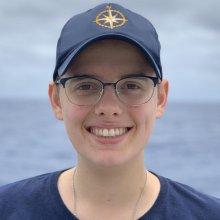 I am currently a senior at Ithaca College getting my degree in Television-Radio. This last semester I completed my minor in History. I am graduating early and will be ending my college career this December on our Los Angeles campus. I am working on becoming a producer in television.

I have many different things that sparked my interest but by far it was watching movies when I was little. Growing up with Dyslexia my escape was always movies. I would watch them and wonder about what went on behind the scenes. I loved learning how the movie was created. I started going to summer camps and just taking a camera and recording little videos. When it came to projects in class I always tried to find a way to turn it into a video.

Growing up I was influenced by many people. When I was little it was Orlando Bloom, I looked up to him because even though he had Dyslexia he was able to get a major role in Lord of The Rings right out of college. I also was encouraged by my parents of course and by the crew of E/V Nautilus. As I have grown older I have seen that the people I meet every day influence me in some way or another.

When it comes to working the thing that amazes me the most is the work itself. I wake up every morning asked to do a new task. I love the people I work with and the views of the countries and states we pass aren’t half bad either. I love every part of my job.

While I have not had many other jobs outside of Nautilus, one thing that has helped me on my career path was studying information beyond my major. I took a minor in history. I took science, education, and gender-studies classes. I wanted to expand my view and mind so that I could understand more about other jobs, not just mine.

Bachelor of Science in Television-Radio with a minor in history 2019.

I love being outdoors although my work has me often inside a studio. Horseback riding, swimming, and hiking are just a few of the things I love to do.

Work hard in school and follow your dreams, but while you are following your dreams remember it’s ok to change your dreams at any point in time. I also recommend pursuing the opportunity to go to camps or do internships. This is how I learned what I liked and what I didn’t like about a future career.