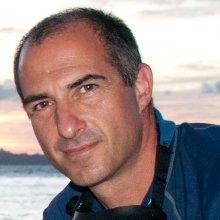 Dan Tchernov will serve as a biologist onboard the E/V Nautilus.

Dan is the deputy director of the Leon H.Charney School of Marine Sciences in the University of Haifa and the head of the marine biology department. His main interest is in deep reefs and climate change biology. Dan has been studying the phenomenon of coral bleaching in the Pacific Ocean, the Caribbean, the Red Sea and the Mediterranean Sea. In addition, Dan investigated the issue of carbon usage by photosynthetic organisms in the world oceans.