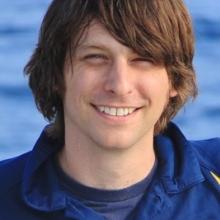 Ben is one of the ROV pilots onboard the Nautilus this year.

Ben is returning for his second season aboard the Nautilus from Long Beach, California, where he has just completed his Associate of Science degree in Electrical Technology. Last year Ben spent four weeks aboard as a student intern through the Marine Advanced Technology Education center. Ben has an extensive background in Electrical technology and loves robotics. In 2009 his team from Long Beach competed in the international MATE ROV design competition, taking second place worldwide. When not on board or tinkering with robots, Ben enjoys kayaking with his dogs, traveling, sailing, and paintball.