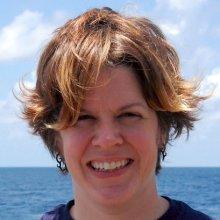 Amy Borgens was appointed State Marine Archeologist at the Texas Historical Commission in June 2010. As the State Marine Archeologist, Amy is responsible for the preservation, protection, and investigation of shipwrecks and other submerged sites in all state-owned waters. She has worked in the field of Texas maritime archeology since 1997 and has been associated with several notable Texas shipwreck projects, including La Belle and USS Westfield. In addition, Amy assisted in the excavation of Oklahoma’s only known shipwreck site, Heroine (1838), and she participated in the remotely operated vehicle investigation of an early 19th-century shipwreck at a depth of 4,000 feet off the coast of Louisiana (the Mardi Gras Shipwreck Project). Collectively, Amy has recorded historic shipwrecks dating from the Byzantine Period to the mid-20th century and has worked on projects in Louisiana, Oklahoma, Texas, Canada, Turkey, and the Gulf of Mexico. Her specializations include early nineteenth-century Gulf of Mexico maritime history and the study of historic small arms artifact assemblages. Her experience in the field of archeology includes wreck excavation and documentation, conservation, artifact photography, and illustration.