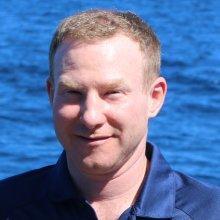 My research focuses on volcanic processes in the deep ocean. I use a variety of remote sensing techniques, direct observations, and textural and geochemical analyses of rock samples to understand how magma is generated, transported and stored in the crust, and erupts at the seafloor. My research often begins with an exploration phase in which I collect detailed mapping data to evaluate the distribution of volcanic, tectonic, and hydrothermal features. I use these maps to interpret the geologic history and informed targeted sampling of seafloor features. I then use microanalytical techniques to resolve the geochemistry of samples and the sizes and distributions of bubbles and crystals within the rocks. I have studied volcanic processes and associated tectonics and hydrothermalism at mid-ocean ridges in the Pacific and Atlantic Oceans, at Ocean islands such as the Galapagos, and at submarine volcanic arcs such as the Kermadec Arc off New-Zealand.

I went to college in Minnesota (Carleton College), where the winters are very cold. When I had an opportunity to do some research in Hawaii I jumped at the chance to defrost, but when I got there I realized I had found my passion for volcanology. I sought out a graduate program (University of Oregon) where I could continue to work on volcanic processes in Hawaii. After my graduate degree, I started a post-doctoral position at Woods Hole Oceanographic Institution where I began to research mid-ocean ridge volcanism. I found that much of what I had studied on land in Hawaii was applicable to the oceans, but layered on top of that was an astounding amount of exploration and discovery.

Initially, I was influenced by the scientists at the Hawaii Volcanoes Observatory. I was shocked that studying volcanoes in Hawaii could be a job. Later I was influenced by my graduate advisor, Kathy Cashman, who taught me to look in unusual places to find the answers to my scientific questions. Finally, I've been influenced by the incredible ocean science community who have encouraged my appreciation of multi-disciplinary science in the oceans.