While Ocean Exploration Trust mobilizes for the 2021 season aboard E/V Nautilus, our team is also collaborating on an expedition — in freshwater! Funded by the National Marine Sanctuary Foundation, we will explore priority areas of the nearly 12,000-square-kilometer Thunder Bay National Marine Sanctuary (TBNMS). Participating organizations include University of New Hampshire’s Center for Coastal and Ocean Mapping, NOAA Office of National Marine Sanctuaries, and NOAA Office of Coast Survey. Working onshore and offshore of northern Michigan in Lake Huron, we acknowledge the traditional and contemporary homelands of the people of the Council of Three Fires, the Ojibwe, Potawatomi, and Odawa.

Continuing from our successful collaborative survey of 153 square kilometers of sanctuary lakebed in 2019, we will conduct more multibeam mapping in 2021. Co-lead scientists Stephanie Gandulla, Research Coordinator, and Jeff Gray, Superintendent, from Thunder Bay National Marine Sanctuary will be guiding research priorities, with ASV Team Leader Val Schmidt from UNH's Center for Coastal and Ocean Mapping, and Ocean Exploration Trust’s Expedition Leader Dwight Coleman. This project marks the second partnership between TBNMS and the Ocean Exploration Trust, building upon previous exploration projects led by OET President Dr. Robert Ballard in Lake Huron in 2001 and 2002 with the former Institute For Exploration.

In Search of Shipwrecks: Underwater Archaeology of the Great Lakes

Located in Lake Huron, TBNMS was established in 2000 as the nation’s first freshwater national marine sanctuary to protect one of the nation’s most historically significant collections of shipwrecks. Within this boundary are 99 known shipwreck sites, while historic research indicates as many as 100 additional sites in the area remain undiscovered. Submerged archaeological sites within TBNMS present a nearly complete collection of Great Lakes vessel types, from small schooners and pioneer steamboats of the 1830s to massive industrial bulk carriers that supported America’s heavy industries during the 20th-century.

Thunder Bay is known colloquially as “Shipwreck Alley” due to numerous wrecks in this region over the last two hundred years. Groundings, fog, and storms — each infamous for claiming ships and sailors — characterize the many losses in these shallow waters. Two targets of this expedition’s survey area include Nonpareil, a wooden schooner lost in 1866 reportedly west of Middle Island, and the Topaz VII, a wooden yacht deliberately burned off the shores of Rogers City to avoid capture in 1941.

Mapping the Lakebed with Autonomous Technology

From June 7-20, 2021, this mission will map sanctuary areas that have not been scientifically surveyed, with a goal of discovering new shipwrecks and identifying shipwreck locations within expanded sanctuary boundaries. TBNMS boundaries expanded in 2014 from 1,100 to 11,100 square kilometers, making it the nation’s largest marine protected area focused on underwater cultural heritage sites, and only approximately 16% of sanctuary bottomlands are mapped at high resolution.

Mapping will be conducted with a multibeam sonar system aboard autonomous surface vehicle Bathymetric Explorer and Navigator — ASV BEN — from the University of New Hampshire’s Center for Coastal and Ocean Mapping. ASV BEN is a 4-meter long vessel with diesel jet drive propulsion, a top speed of 5.5 knots and an endurance of about 16 hours. The vehicle is also equipped with state-of-the art seafloor mapping systems for hydrographic surveys. Bathymetry and backscatter data collected by this technology will be used to produce lakebed habitat maps that will illustrate the condition of coastal Lake Huron’s ecosystems, as well as to inform navigational charts.

With dynamic shorelines and shifting sands, three targeted mapping areas in northern Lake Huron embody the diverse and rich maritime cultural landscape of the Great Lakes. These areas are primarily the dangerous, near-shore shallow waters that are difficult to access with traditional survey platforms. In addition to the potential discovery of historically significant shipwrecks, sanctuary waters in Lake Huron also hold the potential for unique natural features like sinkholes that could provide links to ancient ecosystems, glacial features of interest, and important fish habitat. 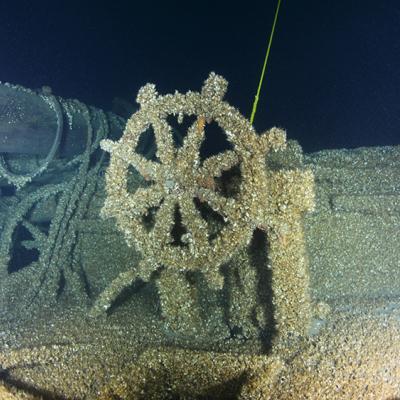 Continuing from our successful collaborative survey of 153 square kilometers of sanctuary lakebed in 2019, the 2021 exploration project will explore priority areas of the 4,300 square mile Thunder Bay National Marine Sanctuary (TBNMS) with both multibeam mapping and ROV exploration. Working onshore and offshore of Alpena, Michigan, we acknowledge the traditional and contemporary homelands of the people of the Council of Three Fires, the Ojibwe, Potawatomi, and Odawa.