Sandy beaches, palm trees, and...paleo shorelines? One of the most well-known and densely-populated stretches of the California coast did not always look the way it does now. Stretched off the Southern California coast between Santa Barbara and Los Angeles, the Channel Islands are reminders of millions of years of a changing geologic landscape.

Nautilus began working with the Channel Islands National Marine Sanctuary in 2016 to conduct high-resolution mapping and exploratory ROV dives of unsurveyed regions of this offshore sanctuary. The 2017 Nautilus expedition continues this work as part of a larger project to understand sea level history and locate, map, and document submerged shorelines in target regions in the northern Channel Islands, particularly Anacapa and Santa Cruz Islands, and an area west of Santa Barbara Island. Research partners for this expedition running July 7-29, 2017 include NOAA Office of Exploration and Research and University of New Hampshire-Center for Coastal and Ocean Mapping.

The Channel Islands region has a complex geologic history, starting with a fiery formation by submarine volcanism 19-15 million years ago, rotational movement, and extreme uplift due to faults cracking through the earth’s crust 2-5 million years ago. There is evidence that the islands have been slowly subsiding--shifting downwards--for the last 1.2 million years. While the foundations were shifting, changing uplift rates and glacial cycles also resulted in fluctuating sea levels eroding away the islands, leaving strands of sedimentary rocks both above and below the current sea level.

During the last Ice Age, which lasted until about 10,000 years ago, sea levels were hundreds of feet lower than today, and powerful winter waves pounded against the steep rocky coastline, eroding away shorelines of boulders. Spires, caves, and arches were carved out when the less resistant, crumbly material was flushed out in these intertidal zones, leaving more durable rock features behind. Many of these features were submerged as ice sheets and glaciers melted and sea levels began to rise, but reveal themselves in sonar mapping data--these paleo shorelines are the main target of our 2017 Channel Islands cruise.

This complex interplay of tectonics and sea level history is one of the reasons we are studying paleo shorelines on these islands. Visual exploration and geological sampling will aid in understanding the sea level change and tectonic history of the Northern Channel Islands, and how biological diversity may have shifted due to climate impacts or changing geologies. Recent discoveries shed more light on biological changes during the last Ice Age, when the four northern islands of the Channel Islands actually formed one large island--Santa Rosae. Swimming several miles from shore, large wooly mammoths swam to Santa Rosae Island and due to isolation and decreasing food supplies, became smaller over time. Fossils of these pygmy mammoths have been found on the Santa Cruz, Santa Rosa, and San Miguel Islands.

The Channel Islands National Marine Sanctuary (CINMS) is one of the agencies tasked with the protection of deep-water habitats, commercially important species, and deep sea coral ecosystems around the islands, yet lacks a detailed understanding of the distribution, abundance, and condition of the resources within the Sanctuary. Less than 50% of the seafloor within the CINMS boundaries has been mapped by high-resolution sonar, and the 2016 Nautilus expedition with NOAA’s Office of Exploration and Research and CINMS to the same region worked to cut this knowledge gap nearly in half.

Developing maps of the seafloor and characterizing biological habitat and geological character of the seafloor using ROVs provides detailed information that will help guide CINMS resource protection issues including incident response and restoration, protected resource and fisheries management, navigational safety, and conservation. Joined by our partners in exploration, this expedition will help expand the scientific community’s understanding of sea level changes and ancient shorelines.

Nautilus exploration methods for this expedition include:

Additional vessels involved in this exploration include R/V Shearwater and an Autonomous Surface Vehicle (ASV), both equipped with sonar mapping echosounders to produce high resolution maps that scientists can further study. These preliminary mapping surveys are also used by our team aboard Nautilus to follow up on promising targets by using remotely operated vehicles (ROVs) Hercules and Argus for HD video characterization, geological sampling, and high resolution mapping.

During the Nautilus expedition, our team will also be in communication with an expedition launched from dive boat Conception. Led by National Geographic Explorer Kenny Broad, this dive team will use SCUBA-diver aided systems to map and image the interior of a known shallow water cave to test technologies that can be transitioned to remote vehicles in the future to map submerged caves that are below diver depth. 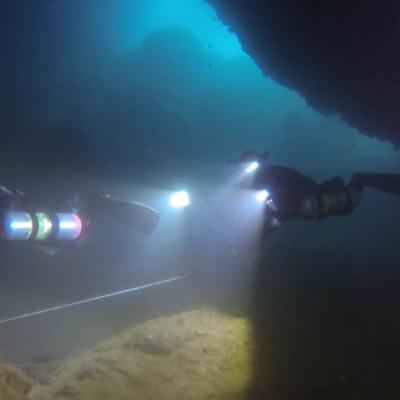 The Channel Islands National Marine Sanctuary (CINMS) is one of the agencies tasked with the protection of deep-water habitats, commercially important species, and deep sea coral ecosystems around the islands, yet lacks a detailed understanding of the distribution, abundance, and condition of the resources within the Sanctuary. 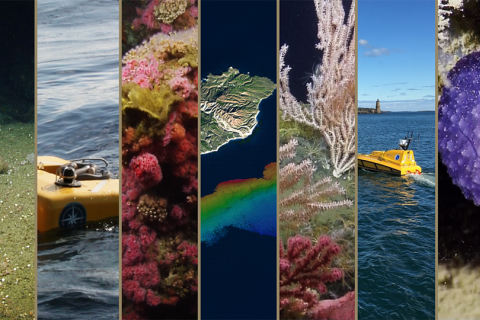 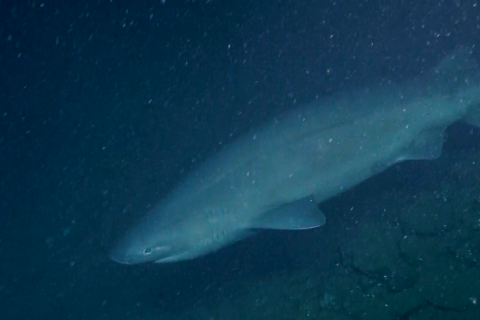 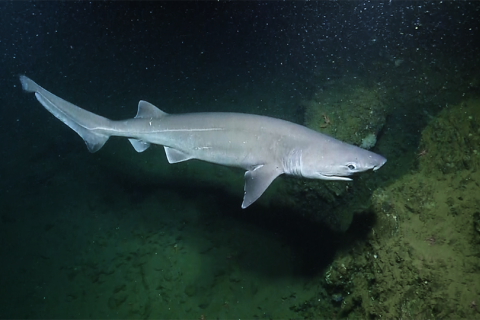