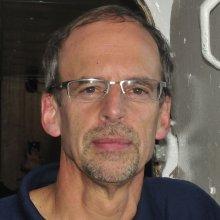 My research deals mainly with how and why volcanoes erupt explosively. I'm particularly interested in very large eruptions that impact human populations and the global environment. I've studied notable eruptions at Mt. St. Helens, Vesuvius, Krakatau and Tambora. Much of my research involves using the volcanic deposits at volcanoes to reconstruct the nature of the eruptions and their causes. More recently, I've been studying submarine volcanoes that erupt explosively in the Mediterranean, Caribbean and the Pacific Ocean. Our understanding of explosive volcanism on land in now quite sophisticated but knowledge of how volcanoes behave underwater is an exciting new frontier in the field of volcanology.

When I was a graduate student at the University of Rhode Island I had the opportunity to visit Mt. St. Helens one week after the devastating eruption in 1980. Hiking into the blast zone and seeing the tremendous forces that volcanoes can unleash made a huge impression on me and set me on a path of studying this phenomenon for more than three decades.

I think I have to credit the U.S. Space Program for triggering my initial interest in science. I was in high school when the race to land a man on the moon was in full swing. I became fascinated with rockets, electronics and space exploration. In college, I became more interested in the natural environment, largely as a result of my love of backpacking, and decided to pursue a degree in geology. In graduate school at the University of Rhode Island, I benefited tremendously from mentorship by Haraldur Sigurdsson and a long collaboration with Steve Sparks from the U.K. Both of them have shaped my career throughout the years.

With the dramatic increase in the world's population, the opportunity to be the first person to make a discovery in the natural is shrinking. Luckily the oceans are still a vast unexplored region of our planet and every time I do a dive with Hercules and Argus I still marvel that we are exploring places where no humans have visited before.

As a graduate student, I had my first opportunity to go to sea and experience a research cruise. We were trying to take some sediment cores in the North Atlantic during winter but the weather was very bad and I wondered how anyone could have fun doing this. My next cruise was to the Caribbean and the conditions were perfect. From that point on I've always loved going to sea and I especially like going out on the Nautilus where the mission is one of true exploration!

I love cycling, tennis and building things in my workshop. As the chief chef in our household, I also make a mean lasagna.

Oceanography is a truly interdisciplinary science. If you want to work in the oceans, you first need to get a strong foundation in one of the basic sciences such as physics, geology, biology or chemistry. Then you need to focus on how your chosen field can solve new problems in our exploration of the marine environment. Don't hesitate to wander now and then away from your main field and expand your breadth of understanding. In the sea, aspects of all sciences come together in complex and fascinating ways that we are just beginning to appreciate.

I first became involved with Nautilus Exploration Program in 2005 when Dr. Ballard joined the faculty at URI. From 2007 to 2009 I helped oversee the construction of the Inner Space at the Graduate School of Oceanography Bay Campus and saw firsthand the great potential for telepresence exploration of the oceans. I have been extremely fortunate to have had the opportunity to lead 8 expeditions of the Nautilus in the Mediterranean, Caribbean and Pacific Ocean where we've explored submarine volcanoes and active hydrothermal vent systems.