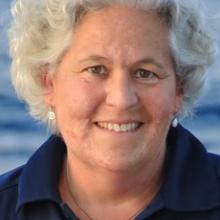 Sharon is an Oceanographer from NOAA’s Pacific Marine Environmental Laboratory in Seattle, Washington. As a member of the NOAA Vents program, she specializes in the development of methods and instrumentation for the detection, monitoring, and mapping of hydrothermal plumes in the ocean above mid-ocean ridges and submarine volcanoes. She is also interested in how fine ash disperses into the ocean from actively erupting submarine volcanoes. She has participated in numerous research expeditions since 1979, including several to the submarine volcanoes of the Mariana (between Guam and Japan), Kermadec (north of New Zealand) and Aeolian arcs (Italy).