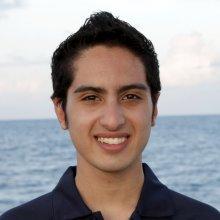 Sebastian Martinez is a recent graduate from Mount Rainier High School in Des Moines, WA with a passion for marine science from a very young age. Sebastian has volunteered over 500 community service hours at the Seattle Aquarium and received the New Interpretive Teen Volunteer of the Year Award. Sebastian spent two summers and his junior year enrolled in an Oceanography course with Puget Sound Skills Center (PSSC) in Sea Tac where he studied in the PSSC marine technology laboratory at Seahurst Park. During his studies at the laboratory, Sebastian earned college credit from University of Washington, became a certified cold water survivalist by National Oceanic Atmospheric Association (NOAA), and also received the Student of the Month and Student of the Year award for his work. In his free time, Sebastian actively works to bring a stop to the negative stereotypes that surround those with disabilities, as he also has both Tourrette’s Syndrome and high functioning Autism.

Sebastian graduated from Mount Rainier High School in 2013. He will be attending Hawaii Pacific University in the fall of 2013 and majoring in Marine Biology.