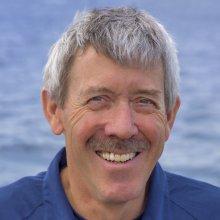 I am the captain of 'Tall Ships' and Sailing Research Vessels, conducting a 25+ year Message in a Bottle project. I am the Marine Projects Coordinator aboard US Antarctica Program Research Vesselsand I work as the scientific Navigator aboard E/V Nautilus.

Sailing Around the World on a 38-foot Sailboat with my family when I was ten-years-old and following my Father's excitement in Oceanographic Research Operations, Marine Engineering, and Ocean Exploration.

My mentors have come in different forms and varieties, and all have helped me pursue this path.

That's a tough one; in the past year I've sailed a Tall Ship with college students from American Samoa to New Zealand while teaching Celestial Navigation and investigating Polynesian culture, worked aboard a Research Vessel in Antarctica on an expedition discovering 70-million year old dinosaur fossils, Captained the 139-year old 1877 Barque ELISSA (ten years older than the Statute of Liberty!) and had Messages in Bottles discovered in 3 different oceans.

Working as a Museum Interpreter at Mystic Seaport Museum, Captain of the Schooner AMISTAD, 4 1/2 years as a US Naval Officer, working in the California Offshore Oil Industry, spending 8-weeks underwater on a Nuclear Submarine.

Follow your dreams, realize it's a 'Journey' and not a Destination so sometimes what may seem a tangent turns out, with hindsight, to have been the path that led to the most rewarding outcomes!

Encountered impressive individuals working with the NAUTILUS program and realized that my skill set is complimentary to the mission of the program.

"Working aboard the Nautilus allows me to participate in investigating new elements of the oceanic environment utilizing the tools of this extremely capable vessel. I am thrilled to be part of this new shipboard community, and by sharing my experiences invite others to learn about this amazing thing we call the sea."