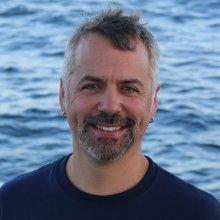 I am an isotope biogeochemist at Woods Hole Oceanographic Institution. I specialize in trying to understand how elements such as nitrogen, carbon, and oxygen are cycled through biological, chemical and geological processes. My work takes me to many different types of environments - and in general, most of these kinds of analyses take place back in my lab at WHOI. However, I am also working towards developing analytical tools that can be used by scientists on the seafloor to improve our chemical understanding of the environment in real time.

Since I was a kid, I have always been interested in the natural world and spent lots of time playing in creeks, marshes, woods, and beaches. As I began thinking about my major in college - I fell right into geology and environmental science. I had an amazing professor during my Master's, leading field courses in the Bahamas and Costa Rica, who really inspired me to pursue a career in marine science. As I began specializing more in graduate school I became more interested in the interactions between environmental chemistry and microbes.

The most inspirational people early on were a handful of really engaging professors showing me how the natural world worked (geologically, ecologically, and chemically). As I moved on - there were key scientists that I interacted with that really put their confidence in me and handed me the keys and put me in the driver seat early on. This helped build my confidence tremendously.

Any time you get to lay eyes on the seafloor from the control van it is breathtaking and inspiring. I love my work precisely because it is so varied and unpredictable. I get to interact with a wide variety of people (students, engineers, scientists, the public, etc.). I feel very lucky.

I once interned at the Monterey Bay Aquarium Research Institute for several months - which opened my eyes to the world of deep sea research. I worked at the USGS in a range of capacities too which really opened my eyes to how science gets done on the government side of things.

Don't give up - be persistent - knock on doors - be the squeaky wheel - volunteer - get yourself involved in things that you're interested in - do well in school - stay focused - be flexible in the path leading to your goals, it is rare the everything goes according to plan! - be ready to pounce on an opportunity when it arises!

I was invited to join a cruise a few years ago - and have been trying to come back as much as possible since!

"Every time I get the opportunity to get aboard a ship and conduct deep-sea science I am continually amazed at the immensity of the deep and how little we know about what is happening down there. I feel lucky to be part of the exploration!"