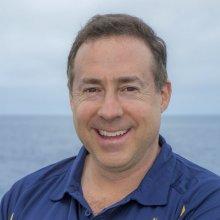 I'm a filmmaker and historian specializing in aviation and maritime subjects. In addition to extensive archival work, I've spent a great deal of time in the field either leading or serving on expeditions from the Pacific to the Adriatic, locating, identifying, and documenting a variety of aircraft and shipwrecks. My colleagues and I created the Air/Sea Heritage Foundation to pursue these things that we love and projects precisely like the search for Samoan Clipper.

For as long as I can remember I’ve been an avid reader, devouring books of true-life aerial history and nautical adventure like Ted Lawson's "Thirty Seconds Over Tokyo" and Farley Mowat's "Grey Seas Under.” I was captivated by the screen exploits of Indiana Jones and the novels of Clive Cussler. News accounts of remarkable discoveries (such as tracking down planes for the new Smithsonian National Air & Space Museum, the first dives to USS Monitor, and Dr. Ballard’s explorations of Titanic, Bismarck, and USS Yorktown) made me realize that the physical remains from many of these epic stories were still out there somewhere in the real world and in the present day, just waiting to be found. I knew I wanted to be a part of that.

Easily the greatest and most positive influence on my life and career has been my parents, Edward and Marie Matthews. My late mother always encouraged me to dream big and pursue my passions. And every day my Dad demonstrates with integrity and hard work that you can achieve meaningful things for your family and your community, setting a standard I aspire to follow. Together they’ve supported me and inspired me to contribute something good to the world in my chosen field. I’m certain that, one way or another, both of them will be eagerly watching what happens on Nautilus this summer!

To my mind, the wrecks and relics resting beneath the world's oceans, lakes and rivers cast a unique spell all their own. They represent concrete, tangible links to the events of the past .. be they great, small, celebrated, mysterious or previously unknown. Coming upon an unexplored site and teasing out the clues frozen in those last moments is utterly fascinating and surely the closest any of us will ever come to traveling in time. The ability to share that experience with the public as it happens through the Nautilus Live program is a thrill and a privilege I find extremely gratifying.

Among other things, I've worked as the senior researcher on television documentaries, written, directed, and produced historically set films, and co-authored a non-fiction book. In between, I've served on the board of a non-profit educational foundation, joined the Explorers Club and ultimately co-founded the Air/Sea Heritage Foundation. It's been an exciting ride and I can't wait to see what comes next.

I'm a certified diver and have also earned a private pilot’s license, which certainly comes in handy when seeking our submerged aviation past. I also enjoy downhill skiing but haven't found a good opportunity to incorporate that in any expeditions (yet).

In this instance, it is because I’m the person who initially conceived of the search for Samoan Clipper and assembled the backing and research through my non-profit Air/Sea Heritage Foundation to make it happen. Fittingly, the whole adventure started five years ago with an invitation to participate in a workshop hosted by OET and NOAA with the purpose of identifying targets of interest in the Eastern Pacific Ocean. I presented a white paper (coauthored by Lonnie Schorer and Dr. James Delgado) about Ed Musick’s lost clipper, which emerged from that gathering as a high priority (and later became an official project of Air/Sea Heritage). Subsequently, I was asked to sail on Nautilus as the historic aviation specialist for a mission (in August 2016) to identify and investigate the wreck of the WWII era light carrier USS Independence (CVL-22) where we actually discovered the remains of an aircraft still inside the sunken ship! On that cruise, I had the honor to work with Dr. Michael Brennan, Allison Fundis, and many other of the talented and dedicated people who make up the Corps of Exploration. I am beyond excited for this summer’s opportunity to bring this effort full circle and set out together again on Nautilus in search of Samoan Clipper.

Always be reading, seeking, and learning. Search out primary sources (beyond the internet) and, where possible, get your hands dirty (or wet, as the case may be) out in the field. Most importantly, make friends with those who share your passions. I'm constantly learning and benefitting from the knowledge, experience, and efforts of my peers. They've made my own projects better and given me amazing opportunities to help them in return.