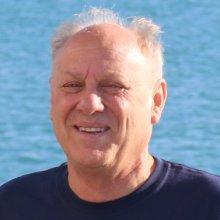 My research background is in aqueous geochemistry; stable isotope geochemistry, ore deposit geology, and hydrothermal systems. My research has focused on water/rock interaction in active and ancient hydrothermal systems, including the "black smokers" on the mid-ocean ridges and geothermal systems on land. Areas of past research include investigation of seafloor hydrothermal systems on sediment-covered portions of the northern Juan de Fuca Ridge and southern Gorda Ridge during Legs 139 and 169 of the Ocean Drilling Program. More recent work includes investigation of a recently discovered sediment-hosted vent field in the Southern Pescadero Basin, Gulf of California. I am also part of the Iceland Deep Drilling Program, which drilled into rhyolite melt at the Krafla Geothermal Field, North Iceland Rift, and into supercritical conditions at the Reykjanes Geothermal Field, an active black smoker analog where the Mid-Atlantic Ridge comes on-shore in southwestern Iceland.

During one of the time periods when I dropped out of college, I spent a lot of time backpacking in the Sierra Nevada Mountains in and around Yosemite. I started to look at the landscape and the rocks around me and thought I should know something about this, so I decided to go back to school and take a geology class.

I took my first geology class from Dr. Charles Meyer, Economic Geologist at the University of California - Berkeley. Dr. Meyer allowed me to take the Spring Field Mapping class, even though I did not have the prerequisites to take that class. Dr. Meyer was a fantastic field geologist with a passion for detailed and accurate mapping. My love for geology sprang out of that experience. However, whatever career success I have had, I owe to my Ph.D. advisor, W.C. Pat Shanks, III. I don't know what motivated Pat to take an interest in a poorly educated kid from the Central Valley of California, but without his support and encouragement, I would not have had the incredibly fun and rewarding life I have been privileged to enjoy.

The joy of learning and discovery are what brings me joy. I can not pinpoint one transformative moment, but rather have had a rich career of new experiences in fascinating and beautiful places. Being the first person to ever see a particular part of the seafloor, discovering a new vent field, going underground in a mine, or being the first to examine a new section of drill core is of course thrilling, but seeing classical outcrops, watching lava flows make new land, and learning about our planet by talking with other scientist can be equally fun.

Prior to joining the faculty at U.C. Davis, I was a research geologist with the U.S. Geological Survey in Menlo Park, CA. I was fortunate to able to work with, and learn from, a large group of highly talented scientists at the USGS.

I'm not sure I am qualified to give career advice as my career has been the result of a lot of good luck and accidentally finding myself in the right place at the right time. I do know that two things that have been important to me are 1) do what you love and follow your interest, and 2) find good colleagues to work with. The most important and rewarding part of my career has been working with smart people who are interesting, generous and just plain fun to work with.

I was a participant on the Monterey Bay Aquarium Research Institute cruise that discovered the Pescadero Vent field. The presence of active hydrothermal venting in this area was indicated by an Autonomous Underwater Vehicle survey. We confirmed the presence of the vent field and sampled hydrothermal fluids, rocks, and animals on a rather intense weather-shortened dive using the Remote Operated Vehicle Doc Ricketts launched from the R/V Western Flyer.