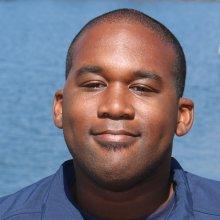 I have found that I excel best where the two subjects of biology and performing arts intersect. It is for this reason that I work as a science communicator and wildlife filmmaker. Moving forward, I would like to focus on creating films that highlight the microscopic world. I have experimented with a variety of macro lenses, and even created an underwater microscope that allows me to record an ‘eye level’ view of microscopic life. My goal is to record the activity of microorganisms, from copepods to cyanobacteria, in their natural habitats across the globe.

I watched a lot of Magic School Bus as a kid. That show infected me with the idea that science and the arts are inherently integrated. Science brings us amazing discoveries, and the arts help the public understand how cool these discoveries really are.

I am very lucky to have a mother who supported my work growing up. She has had to deal with a basement filled cameras taking time-lapses blooming flowers, and tables covered with countless jars of microscopic pond life.

The natural world is filled with all sorts of cool adaptations that I love to observe. I am drawn to the beauty that lies in nature’s aesthetic diversity, from the butterfly’s iridescent wings to the heron’s spear sharp beak.

As an undergraduate, at the College of William and Mary, I worked with a variety of professors, bringing scientific discoveries to the college community. My work included creating several nature-oriented videos for the William and Mary News, leading an ornithology class on an outdoor expedition to locate and film a great horned owl nest, creating timed-lapsed sequences of college greenhouse plants, and photographing, and labeling histological structures for the creation of a comprehensive Lobster Histology Atlas. Most recently, I have worked as a filmmaker and editor under Jaime Reaser, Executive Director of the National Invasive Species Council. I have gathered a variety of footage, ranging from underwater footage of snakeheads to time lapses of blooming plants, as well as numerous interviews with professors and students. This footage has been gathered for the creation of a feature-length film commissioned by the Department of Interior.

I love hiking in nature, filming wildlife, and listening to science fiction and fantasy audiobooks.

If you want to work in science communication, you don't necessarily have to major in a STEM field, but I suggest taking plenty of science courses, and doing plenty of your own research outside of the classroom. The better you understand a subject, the easier it is to create content that shows people just how interesting it is. Remember that the arts play an important role in translating and bringing scientific discoveries to the public.

One of my undergraduate professors, at the College of William and Mary, thought I might be interested in the program, and suggested I apply.