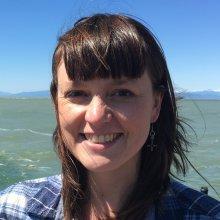 Reyna has served Ocean Networks Canada in its Digital Infrastructure department since January 2009. Currently, she leads the Data Stewardship & Operations Support team which provides metadata management, geospatial services, data archiving functions, and cruise support. In her previous role as scientific programmer, Reyna generated data products and visuals for the NEPTUNE Canada network. In both roles, she has been a keen contributor in the design of Oceans 2.0 tools and interoperability with other ocean data providers. She enjoys participating in cruise expeditions and collaborating with the oceanographic community.

She received her Bachelor of Mathematics in the Applied Mathematics Co-operative Program from the University of Waterloo, and her Master of Science in Ocean Physics under Dr. Eric Kunze at the University of Victoria. Her research area was the transfer of momentum between internal tides and subinertial flow at a dissipating surface reflection. As a graduate student, she had the opportunity to collect oceanographic data on research cruises in coastal BC and the East Pacific Ocean. This fascination with water originates from childhood summers at Lake Winnipeg, Manitoba. Prior work experience spans companies specializing in oceanographic monitoring systems, aerospace engineering, and information technology. In her spare time, she enjoys traveling, outdoor adventures and Nordic culture.