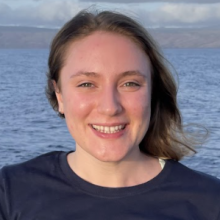 My research focuses on a series of young volcanic islands off the western coast of Mexico. I powder, dissolve, and polish pieces of lava from the submarine vents and analyze them in a variety of ways to get the chemical composition of the rocks. The lava chemistry can tell us a lot about the processes happening out of sight in the mantle like what the temperature is, how deep the lava came from, what the lava may have interacted with on its way to the surface, and how explosive it may be. In the past, all of my fieldwork has involved hiking to collect samples, so I'm excited to experience my first scientific cruise!

I never thought I'd be doing science. During my first year of college, I took a geology course called Natural Disasters to satisfy a general education science with a lab requirement with the hopes of putting the subject behind me. Much to my surprise, everything clicked in my mind from the scientific concepts to the fieldwork, and most importantly, to the societal implications of the research we were doing. From then on, I was a geology major. I chose to study volcanoes because I thought they were the most exciting thing one could look at in the realm of rocks. I began researching volcanoes on land but soon realized that a majority of the world's volcanoes sit unstudied on the seafloor, which brought me into oceanography.

The professors in the Geology Department at Union College were so hands-on when it came to fieldwork. They encouraged me to think critically and creatively about my own research and helped make me the scientist I am today.

I think it's really incredible that we can use the chemical compositions of lava to figure out what kinds of things are going on deep down in the mantle.

I had a lot of amazing field experiences as a student researcher in college that convinced me that I didn't want a boring job where I'd be sitting at a desk all day. The majority of my labs at Union got us out into nature where we learned skills from mapping to ice coring. Additionally, I interned for my city's water department where my partner and I were given a truck, a daily list of tasks, and were sent off all over the county to sample different ponds, reservoirs, and tributaries. After graduating college, I moved to Utah to work for the National Park Service and Student Conservation Association at Dinosaur National Monument. Out there I was working on science communication and education programs for students of all levels led interpretive hikes and held interactive talks via Skype with classrooms all over the world. These experiences led me to grad school to advance my own knowledge and understanding of the natural world.

I'd advise any future geologists to take advantage of as many field experiences as possible. It's where you learn a lot of practical skills as well as what kind(s) of geology you like and don't like. If there aren't many opportunities at your school or in your area, there are a lot of programs you can find online to apply to. This community also tends to be really friendly, so it's easy to reach out if you have questions. Don't hesitate to ask!

One of my labmate's research projects is closely tied with Ocean Exploration Trust and she had really enjoyed participating on a cruise in December 2021. When OET put the call out for two geologists for an upcoming cruise, our advisor brought it to our attention and we quickly volunteered.