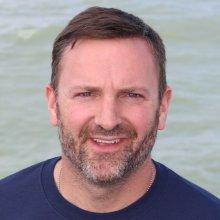 I sample and analyze hydrothermal plumes for a number of chemical constituents, with a specific focus on trace metals, to garner a better understanding of how underwater volcanoes affect ocean chemistry.

I was looking for a career that would allow me to be in public service, have a chemistry component to it, and involve fieldwork. Oceanography turned out to be the best fit.

Two professors, in particular, influenced me the most: Dr. Bell who accepted me for an NSF REU position and Dr. Gobler who I worked with for my senior thesis.

Just getting a basic understanding of how materials are moved between the crustal and ocean environments.

As a graduate student at Stony Brook, I studied trace metal and nutrient loadings into the East River and Long Island Sound. After graduating I worked for the Bermuda Atlantic Time-Series Study then found my way to Seattle to study hydrothermal vents.