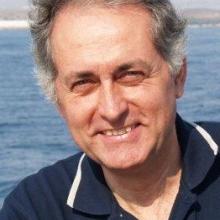 Miquel Canals will serve as co-­‐chief scientist onboard the E/V Nautilus. Miquel and his team are also providing background information on the study areas for the success of the cruise.

Miquel has spent his entire career working on various aspects of Marine Geology mostly in the Mediterranean Sea, Antarctica, the Eastern Atlantic Ocean and the Arctic Ocean. He has been chief and co-­‐chief scientist in dozens of cruises onboard Spanish, Russian, French, British and Italian vessels. His experience includes deep-­‐sea diving both with manned submersibles and ROVs.

In the last 10 years, Miquel has supervised 12 PhD theses and 17 master theses, and has participated in 62 research projects and contracts, publicly and privately funded, of which he has coordinated 35. Most of these projects are multidisciplinary and cover a broad range of disciplines, from Marine Sedimentology to Paleoceanography, from Biogeochemistry to Geohazard Assessment, and from Marine Technologies to Applied Research.

Miquel is a “Most cited scientist in Geosciences” according to the Essential Science Indicators of the Institute for Scientific Information (ISI Web of knowledge). He is author of 6 “ISI Highly Cited Papers” (0.5% of most cited papers for given time periods) and two “TOP25 Most Downloaded Papers” in Marine Geology. Miquel is also author of the “Second most downloaded paper” from Quaternary Science Reviews, as extracted from ScienceDirect TOP25 Hottest Articles (subject area: Earth and Planetary Sciences, Mon Mar 15 05:27:34 GMT 2010).

Miquel’s current research topics are on global change and the ocean, marine sedimentary processes and products, polar marine research, monitoring of the marine environment, marine geohazards and seafloor mapping. Some of his most outstanding recent scientific contributions are on the mechanisms involved and the effects of dense shelf water cascading over the deep-­‐ sea ecosystem in the Mediterranean Sea and the Arctic Ocean.