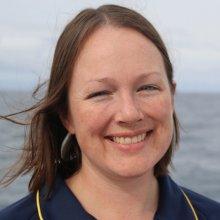 I am a geneticist working on Deep-sea corals and sponges and their associated communities. I use genetic and genomic tools to identify individual coral and sponge species, measure connectivity between populations and resolve ambiguous taxonomy. One tool I am applying to look at the biodiversity of whole deep-sea coral communities is environmental DNA (eDNA), where we can get a picture of the biodiversity at a specific location by sequencing DNA obtained directly out of a water sample, rather than having to sample every animal.

I've always been interested in marine communities, but as an undergraduate at the University of Washington, I had the opportunity to work in a genetics lab in the Oceanography department. This was an eye-opening opportunity into the ways that genetic tools could be applied to learn how marine organisms interacted with and adapted to their environments, and my interest was immediately captured. I've been working in the genetics of marine organisms ever since, working on species ranging from tiny phytoplankton, to salmon to corals.

My parents, they always encouraged me to keep after it and pursue my interests, and later my graduate advisor and several mentors who gave me a push when I needed it, but also let me explore broader subjects.

Working in deep-sea habitats there is always something new to see or explore, and working on deep-sea corals and sponges I am working right at the very early beginning of work on many of these species, getting some of the first genetic sequences that we can build on, this is always exciting.

I've gotten to work in genetics of marine organisms across a variety of species, from killifish in the Gulf of Mexico, to working on genome mapping in Alaskan Salmon, to examining Killer Whale diet.

I love scuba diving, especially in places like British Colombia, I am an avid rock climber, mountaineer, and backpacker, and I also love baking, I haven't bought a loaf of bread since 2020.

Explore. Marine Science has many many facets and by going outside of the box a little you can find something you absolutely love. I thought I was going to do ecology, but ended up loving genetics, and if I had to do it all over, I might take an engineering track!

The Ocean Exploration Trust has been a fantastic partner in collecting eDNA in deep-sea coral communities across the Pacific for a number of years, we collected our first water samples in the field in partnership with them.