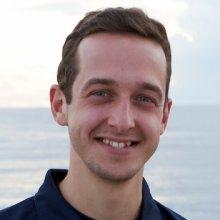 Mathieu Mercier Gingras is a graduate student in maritime archaeology at the Université de Montreal in Canada. Mathieu is examining naval architecture and shipbuilding traditions in order to identify shipwrecks and to document adaptation of shipbuilder’s techniques to colonial contexts in North America. Mathieu has trained as a Scientific Diver for underwater archaeology and ecology with the Albanian Center for Marine Research. He worked on several underwater archaeology projects such as the excavation of a Basque whaling station in the Gulf of St. Lawrence with the Smithsonian Institution and the excavation of the British ship Deltebre 1 with the Centre d’Arqueologia Subaquàtica de Catalunya in Spain. With colleagues from the Université de Montreal, he is mapping the Levis Wreck, the remains of an 18th century French frigate sunk in front of Quebec City.

Mathieu graduated from Université Laval in 2009 with a degree in archaeology.