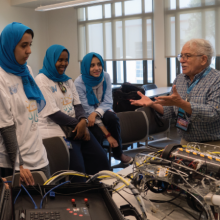 During his undergraduate tenure at the Massachusetts Institute of Technology in the early 1960s, Marty began working with Harold "Doc" Edgerton, who introduced Marty to the use of sonar for exploring the underwater world. Marty soon went on to develop the first commercial sidescan sonar system.  Martin Klein, known as “The Father of Side Scan Sonar”, is the Founder and former President of Klein Associates, Inc. (now Klein Marine Systems) of Salem, New Hampshire. An MIT graduate, he was Program Manager for Sonar Systems at E.G.& G. International where he developed the first commercially successful side scan sonar systems. Klein's sonars have been used around the world to help find many famous shipwrecks including the Titanic, the Atocha, the Lusitania, the Edinburgh, the DeBraak, the Breadalbane, the Hamilton and Scourge, the Lake George Radeau (oldest warship in the U.S.), Sir John Franklin’s HMS Erebus and countless others. He is a Life Member of the IEEE. He was chosen as the New Hampshire Small Business Person of the Year in 1983. He is a fellow of the Explorers Club and the Marine Technology Society and is the former Director of Budget and Finance for the Marine Technology Society. He was elected to the National Academy of Engineering “for the development of underwater imaging systems that have contributed to ocean exploration and the recovery of high-value objects.”

He is on the Advisory Board of the MIT Sea Grant Program and the Stellwagen Bank National Marine Sanctuary and is on the Collections Committee of the MIT Museum. He serves as a judge and mentor for the Marine Advanced Technology Education (MATE) ROV Competition and a judge at the Massachusetts State Science Fair. He has many publications and patents and has received many other awards and recognition for his pioneering work in sonar and ocean exploration.