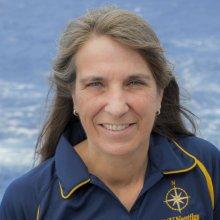 My research interest is with the geological processes that shape the ocean floor. As a marine geophysicist, I enjoy mapping new territory and developing methodologies to investigate volcanic, seismic, sedimentological, and hydrological processes. To that effect, I apply a variety of methods (sonars, gravity, magnetics, seafloor sampling, and deep-submergence technology) to reconstruct ancient geological events that occurred at the seafloor - such as volcanic eruptions, earthquakes, fluid or gas release, landslides...

My interest for the geosciences developed from watching TV documentaries while growing up in France. These documentaries covered oceanography (Jacques Cousteau, of course!), but also volcanology and glaciers. By the time I was in high school, I was hooked and my dream was to explore the planet and understand what processes shaped it.

My parents were supportive of my interest for the geosciences. However, they worried about what practical career path it might lead to (an explorer?) and steered me towards an engineering degree in applied geophysics - a degree that provided me with some solid basis for a research career. But after my engineering studies, I lucked out: I obtained a research assistantship to study for a Master's at the University of Rhode Island, where I discovered plate tectonics and oceanography: Such exciting fields!

The seafloor carries a particular appeal to me because it uniquely exposes the effects of plate tectonics - and because it remains one of the last frontiers for exploration. Oceanography is a multidisciplinary science and I also enjoy collaborating with colleagues of different backgrounds and different countries, opening up new scientific insights from our combined expertise.

Geophysical research has always been a constant in my career, but to achieve this has meant relocating many times between institutions and across continents. I completed my engineering studies in applied geophysics in France, moved to the U.S. for a Master’s at University of Rhode Island, worked as a research geophysicist with the Royal Dutch/Shell in the Netherlands, moved back to the U.S. for a Ph.D. at University of California-Santa Barbara, worked as a post-doc followed by 10 years as a research scientist at the Lamont-Doherty Earth Observatory in New York, moved to University of Missouri for a stint at a tenure-track teaching position, and am presently a research scientist at the University of Rhode Island.

My hobbies are varied and eclectic, so hardly qualify as hobbies. I enjoy hiking, reading, traveling...

A passion for ocean science is a must for pursuing a career in research, as the requirements (including meetings, workshops, and long cruises) and the fiercely competitive landscape for research funds can be a source of stress. However, when it all falls into place, it becomes well worth it. Alternatively, rewarding career paths in oceanography are also accessible with a Master’s degree.

In 2011, I applied for and participated in a workshop organized by NOAA and the Ocean Exploration Trust to identify areas for ocean exploration, where I met the OET team. In 2013, I took a research position at the University of Rhode Island, right next to the OET headquarters, and opportunities developed from there on.

"My primary interest is with understanding the many processes that shapes the seafloor. In my experience, each expedition reveals new unexplained features, and participating in a cruise dedicated to exploration will be particularly exciting."