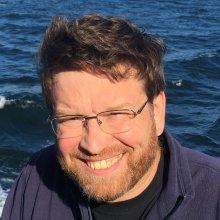 I care for and distribute for scientific use the NASA Cosmic Dust collection, which is composed of asteroidal and cometary dust collected in the stratosphere by NASA high-altitude aircraft. I also study carbon in geological systems across the Solar System and use publicly-available data sources to rapidly locate meteorite falls. The last item is why I am joining the Nautilus, as a combination of eyewitness accounts, seismometer data, and weather radar imagery shows that a very large meteorite fall occurred off of the coast of Washington on 07 March 2018. The fall site for these meteorites is known to sub-km accuracy, and it should be possible to retrieve meteorite(s) at the fall site. Retrieving even one small sample will be scientifically useful not just because meteorites retain a record of the conditions from the early Solar System, but because the fragmentation pattern of this fall is unlike any seen previously and understanding why will help assess impact hazards from future large-event meteorite infall.

I first studied astromaterials in graduate school when a colleague casually asked me to collect some spectroscopy data from a meteorite he was studying. After he convinced me that it was, in fact, a meteorite I was thoroughly fascinated with it. Meteorites, cosmic dust, and other astromaterials are the end products of 4.5 billion years of Solar System formation, and prying into their mysteries helps us solve the natural puzzles of how stars, planets, and all the myriad bodies in our Solar System formed.

Nature has always been my greatest influence, along with the continually-dawning realization that the natural universe we live in operates by rules, systems, and counteracting factors that can be understood and appreciated.

The aspects that we do not fully understand yet. They are the prime motivation for my work and we can measure progress by how well we explain them.

I have served as a Marine where I drove amphibious assault craft, spending a lot of time on board ships that were painted gray. I once worked (briefly) at a landfill, collecting loose trash to keep it from blowing away. That experience helped provide motivation to pursue higher learning. My Ph.D. thesis was on diamond film growth and testing for medical implants, but I haven't done that sort of work in a long time. I have performed fieldwork in Svalbard in the high Arctic, and have spent two field seasons in Antarctica collecting meteorites with the Antarctic Search for Meteorites (ANSMET). I have worked at the Carnegie Institute for Science, the Jet Propulsion Laboratory, the Planetary Science Institute, and now work as a Curator at NASA Johnson Space Center. I love serving as a Curator because it is a scientific research position with a built-in component of service to the collection and the community.

BS in Chemistry from Troy University, MS in Materials Engineering from U. of Alabama at Birmingham, and Ph.D. in Materials Science also from UAB.

I like electronics because aggravation is awesome, and I enjoy rebuilding old vehicles. Fishing with my son is my favorite hobby, though. Sometimes we actually catch fish.

Take every opportunity that comes your way, even if you're not 100% sure it is what you want to do with your life. If you enjoy it, that's great because it will help you by building your experience and skill suites. If you don't enjoy it, then it is just as helpful to know what you don't want to do. And if you want to get into science, keep your ego out of it, stick to good solid scientific practice, and be willing to admit when you have a hypothesis that has been disproven. One of the great things about science is that, as long as you do solid, hypothesis-driven science, you can move forward with a disproven hypothesis as well as with a proven one. Disproven hypotheses can actually be very rewarding - proving a hypothesis typically serves to cement your preconceptions, but a disproven hypothesis makes you re-think your understanding of the issue and can lead to some really interesting findings.

After the 07 March meteorite fall, I shared my data and calculations with as many people as I could in the Seattle/Tacoma area. Some of those people are at the NOAA office that manages the Marine Sanctuary off of the Washington coast. NOAA contacted the Nautilus Exploration Program about possible time spent searching for meteorites, and I enthusiastically followed their lead.